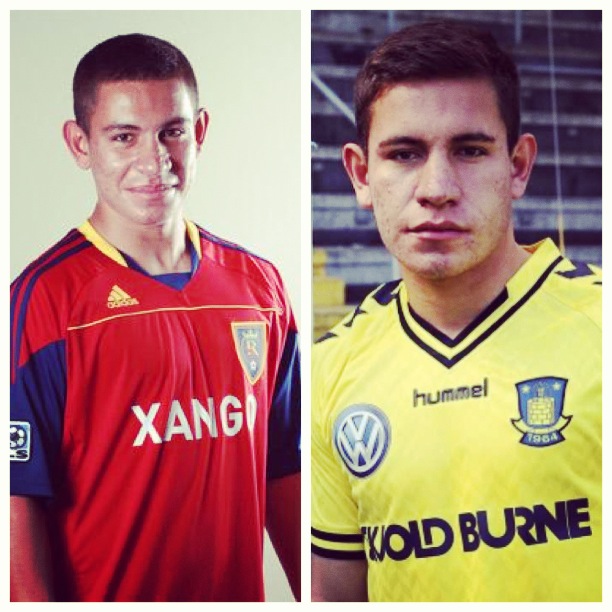 The past thirty days have been exciting at the Grande Sports Academy. Home Grown signee Carlos Salcedo made his professional debut for Real Salt Lake, four academy players were called up to the U-18 & U-17 MNT teams, former player Ricardo Velazco helped PDL side FC Tucson make an incredible run in the US Open Cup, both of our academy teams finished second in the Southwest Division qualifying for the Development Playoffs and now the icing on the cake has occurred.

Former player Maikon “Mikey” Orellana, who left the academy last year, has signed his first professional contract with Danish side Brondby IF (BIF) who have been historically, along with F.C. Copenhagen, one of the strongest teams in Denmark winning the Danish Football Championship 10 times and Danish Cup 6 times since 1981.

Orellana who was a standout for the RSL academy, 34 goals in 2 seasons, left for Europe in hopes of receiving a professional contract after RSL was eliminated from the Development Playoffs in June. Orellana planned a “tour of Europe” with stops and tryouts for multiple teams in different countries.

The first tryout was with BIF and the unthinkable happened when he suffered an injury during the tryout. Orellana’s appearance was enough for BIF coaches to come away impressed and asked him to join the team in December when fully fit.

Orellana rejoined the team and in another stroke of bad luck Orenalla suffered another setback 20 minutes into the tryout when he walked off the pitch injured again. Coaches waited for Orenalla to get recover again and their patience combined with Orenalla’s drive paid off for both parties when he returned fully fit three months later scoring 3 goals in 5 games for BIF’s reserve team.

His story above is a simplified version of what he went through and as Orellana pointed out yesterday when Grande Sports Academy spoke to him, “that’s the story pretty much. A lot harder when you are going through it but much easier to say it like that.”

With the professional contract signed Orellana can now turn his focus and attention to helping his country, El Salvador, in the U-20 World Cup later this month. El Salvador will be making their first ever appearance in the U-20 World Cup and have been grouped with hosts Turkey, Australia and Columbia. First game for La Selecta will be against Turkey on June 22nd.

Below is a Q&A with Orenalla.

Orellana – “Happy for a moment and then back to working hard.”

Grande – Big summer for you with the U-20 World Cup coming up, how excited are you?

Orellana – “I’m very excited, I can’t wait to play and my expectations are always high.”

Grande – A year ago you were with the RSL Academy, what have you learned since you left?

Orellana – “Life doesn’t get better, you just get stronger.”

Grande – When you look back at your time with the academy, what helped you become the player you are today?

Orellana – “Just paying attention and learning from what the coaches had to say.”

Grande – Thank you and good luck this summer!