Throughout the year Grande Sports Academy teams will play numerous scrimmage games against opposing teams to keep their form and to prepare for an upcoming game. Last week Arizona Western Community College arrived at the Grande Sports Academy for a mid-week scrimmage game and brought a special guest along with them. Former Real Salt Lake Academy winger Eti Tavares, now a member of Arizona Western, came back to the Academy for the first time since he left in the summer of 2012.

In his freshman year at Arizona Western, Tavares played a vital role for the Matadors as they advanced to the championship game against Yavapai in the Arizona Community College Athletic Association playoffs unfortunately losing, 1-0. Arizona Western went 18-3 with Tavares starting in 19 games, scoring 4 goals and adding 8 assists.

This summer Tavares will be returning back to the Academy to help out with some of our summer camps as a coach. Before the game last week Grande Sports Academy had a chance to catch up with Tavares. Here is the Q&A.

Grande – What made you come to Grande Sports Academy?

Tavares – “It was a professional atmosphere and I want to try to achieve my dream of becoming a pro soccer player.”

Grande – You were one of the first players to come back to the Academy after leaving, what was that like?

Tavares – “Things look a lot different. The place is filled with players that I played with and others who are new. The place has upgraded. It’s a lot better.” 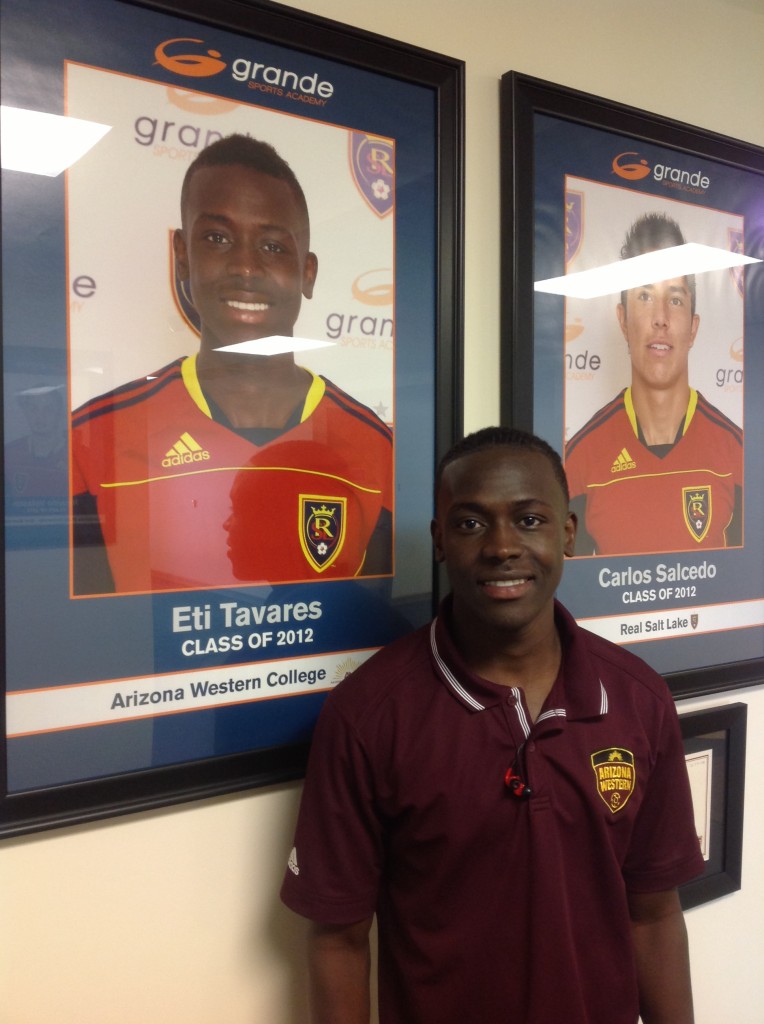 Grande – What is it like to see your picture on the wall?

Tavares – “Most of my best soccer was here and some of my worst experiences also. When I first got here I was nervous and I wasn’t even a starter. But I liked the challenge and halfway through the year I started working hard and I became a starter and I followed it up the following year and things went well from there.”

Grande – What is the biggest difference?

Tavares – “The amount of people. When I first came here there were like 20 people and now there is almost 60. There is a lot of people here now and this place shows me that it’s getting better and better. The facility and the pictures being up on the wall. Also seeing yourself up there is cool.”

Grande – How did your freshman year go at Arizona Western?

Grande – When you look back on the season at Arizona Western is there anything that you have been working on during the off-season?

Tavares – “I like to consider myself a student of the game. I always like to learn but maybe I need get stronger because the league is very physical. Just put away more chances and be a better leader.”

Grande – What is it going to be like for you when you take the field against your former team and teammates?

Tavares – “It’s going to feel a little weird playing against your old teammates. But it’s also fun at the same time because I’m going to come back over the summer and I know if we lose, the players are going to give me some smack talking. I gotta make sure we don’t embarrass ourselves.”