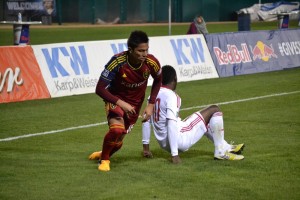 Former Academy product Carlos Salcedo made his debut for Real Salt Lake on Saturday night against Vancouver Whitecaps becoming the first player from the Academy to play in a professional game.

Salcedo came on in the 89th minute and played holding mid for the remainder of the game. RSL Head Coach Jason Kries talked about Salcedo’s performance after the game saying, “Carlos is a player who I feel like has been with us for nearly a year now. He joined in the summer of last year and has gotten better and better and better.I feel like he’s a very good soccer player. It’s something that we’re taking a lot of pride in with the players were able to produce right now out of that Academy system down in Casa Grande. We were down there in the preseason and I was really pleased with what they are doing down there and the players they are producing.”

Grande Sports Academy caught up with Salcedo. Below is our Q&A.

Grande – What did it feel like to hear your name called to enter the game?

Salcedo –  “He told me to start warming up and in the 75th minute he told me to work out harder. I started sprinting and working harder and when he called my name I was ready and it was my time. I have made many sacrifices for this opportunity and it was finally paying off. Thank god everything worked well. Ever since I arrived at the academy I knew I wanted to play for this team. It finally became real and it felt good.”

Grande – What did Head Coach Jason Kries tell you after the game?

Salcedo – “He told me to be ready and told me how I did. I just felt so thankful with the coaching staff. Because it’s a very good team and it feels so good to have a good head coach and I’m thankful. He said he is going to give me more opportunities.”

Grande – Your natural position is CB but you played as a holding mid. Did he talk to you before about playing a different position?

Salcedo – “At the beginning at the preseason I had a conversation and we were talking about what other positions he can consider me as, and one was holding mid. He told me I’m good with the ball and as a center back I know how to defend. If I was going to have an opportunity, to be honest with you, I didn’t think I was going to be as a holding mid. Thought I was going to play as a center back. I’m ready and I have worked so hard for it. It doesn’t matter the position I’m ready to take the opportunity.”

Grande – Any advice you can give some of the other players down at the Academy?

Grande – I’m sure you phone was littered with calls and texts. Who was the first person you talked to after the game?

Salcedo – “My mom and dad. They were very happy because everything I have done in my young career has been for them because they took me to practices and those are the two most important people in my life. All my teammates were tweeting “congrats to my boy Carlos” and one of the first messages that I got was from former coach Martin Vasquez. Martin brought me to the academy and for me I think he was the one that got me to this level where I am right now. When I didn’t have a team in Mexico he was the one who took me over to RSL and from the first day there I knew I wanted to play pro for this team and I want to have a good career then hopefully make the jump to Europe. The first step I already have made. Now I need to have a good career and then the third step is to go to Europe. Little by little it’s all going to the right direction.”