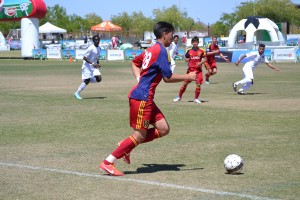 With no Academy games this weekend, all the attention will be focused on our Elite teams as they begin Arizona State Cup play.

Last Wednesday, Arizona Youth Soccer Association released the schedule for the Cup which randomly put teams into different groups for the first round. In every group, regardless of how many teams are in the group, the winner and runner-up will advance to the quarterfinals. Winning teams in the quarterfinals will advance to the semifinals and then to finals where the winner of their specific age group advances to compete in the Region IV championships in Hawaii. Information from the AYSA here.

RSL U18 Elite, in a group with three teams, will be traveling down to Tucson for a game against Tucson TSA 95 Boys Red.

Note – Final group games for each team will be on Saturday, April 27th at Scottsdale Sports Complex.

As always we will be LIVE Tweeting from the games. Follow us for updates @grandesportsa.