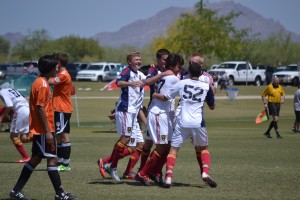 The upcoming weekend is going to be a busy one with the potential to get even busier. Our U18 and U16 Academy teams will be in action on Sunday when they host Real So Cal. Our U18 & U16 Elite teams will be traveling to Scottsdale on Saturday for their final group game in Arizona State Cup with a possible chance to play in the quarterfinals the following day.

Sunday’s game versus Real So Cal is the first of three important games the U18 and U16 Academy teams will face over the next week.

The last time these two teams played Real So Cal defeated RSL, 3-0, in LA on March 9th. In that game RSL played extraordinary for 30 minutes before Real So Cal countered and grabbed the opening goal. RSL then chased for the rest of the game and fought an uphill battle that was not helped by the narrow pitch. Game recap and pictures here.

RSL U16 Academy team is currently in third place in the Southwest Division and need a massive victory over second place Real So Cal to keep pace in the division. On the season RSL, first place in wild card pool, has 46 points and Real So Cal, 11th place in overall playoff pool, has 51 points.

These teams also squared off on March 9th with RSL leading for the majority of the game. A turnover deep inside the RSL half  in the final minutes of the game saw So Cal take advantage of the mistake scoring the equalizer, 2-2. Game recap and pictures here. 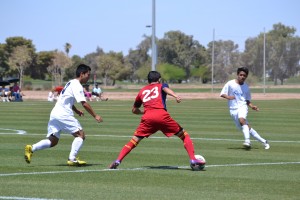 RSL U16 Elite will take on Sereno later in the day, 1:30pm also at Scottsdale Sports Complex. For the U16’s to advance a few things need to happen. They need to defeat Sereno and hope CCV Stars lose or draw versus Valparaiso. RSL could draw Sereno and still advance in CCV Stars lose. If CCV Stars win they advance no matter what the result is for RSL.

We hope to see everyone at our games!

IF RSL ADVANCE OUT OF GROUP PLAY