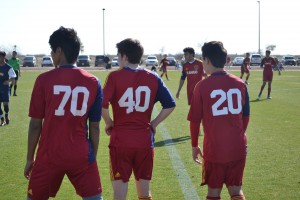 Another busy weekend down here at Grande Sports Academy. Our U18 & U16 teams will be traveling to Washington to take on Crossfire Premier and Seattle Sounders FC and our U16 Elite team will be traveling down to Tucson to play their last three group games in the first round of Far West Regional.

“We treat it like every other game,” said assistant coach Freddy Juarez. “Always looking to win and have a good performance. Going to be nice to play in a nice atmosphere with good fans and a great climate.”

The RSL-AZ U16 Elite team are in a great position to advance out of the first round in Far West Regional Play. They played their first 3 games of group play 2 weeks ago and picked up 5 points, winning one game and drawing two. With three games left in group play RSL-AZ finds themselves 6 points behind second place Chiva Jr. USA SC. If RSL can find a way to pick up 7 points they have a great shot to finish second in the group which will see them advance to the next round. Complete standings here.

“Were going to have to play as a team. RSL as one soccer and if we get the wins then it’s going to be a good weekend for us,” said Nate Deaton.

It’s going to be a busy weekend with games but the players and coaches are ready. We hope to see everyone at the games!