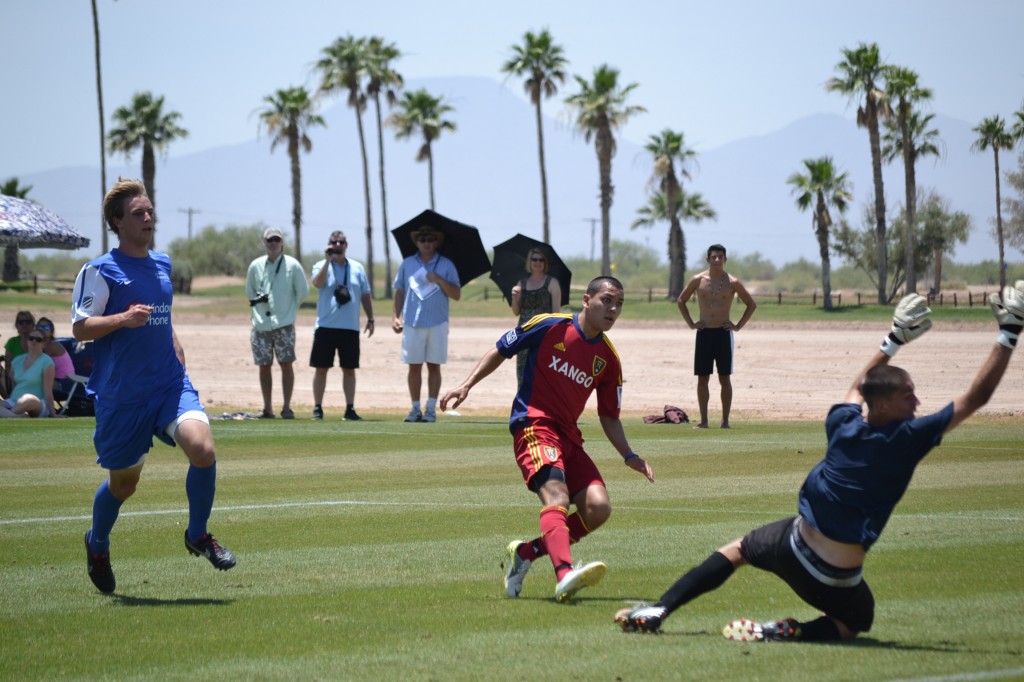 The final regular season game for the Real Salt Lake U18’s & U16’s was this past weekend vs Arsenal FC. The U18’s needed a victory and some help to win the Southwest Division and the U16’s needed any points to secure the best possible playoff seeding. Below is the recap, pictures and video of a goal from the U18’s.

It took Real Salt Lake U18’s 44 minutes to find the back of the net and once they did the onslaught was on. A season high eight goals were scored in the season finale against Arsenal FC at Grande Sports World. RSL finishes the season 19-5-4 for a second place finish in the Southwest Division, the highest finish in the three-year history for the academy.

After being down a goal for the majority of the half RSL equalized in the 45th minute when an Arsenal player was shown a second yellow for a vicious tackle from behind which sent him off. Tigran Tiraturyan stepped up and converted the free kick. Moments later RSL pressured the Arsenal backline which created a turnover. Coco Navarro found himself alone in the box and scored RSL’s second of the match.

One change at the half brought Kostas Kotselas into the game for Jon Zabasajja. His presence was felt 44 seconds later when he doubled RSL’s lead. Amer Sasivarevic scored the next 2 goals giving him 6 in 8 games. Te Wihongi entered the game before Sasivarevic’s second goal and created numerous defensive problems for Arsenal on the left side. In the 70th minute Wihongi sent in a low cross which lead to a blocked Navarro shot. Seconds later Wihongi made the same run again and sent in the low cross. This time Navarro would not be denied giving him his second goal in the game and his 20th on the season.

RSL’s 7th goal was scored by Kotselas from an Andrew Brody cross and second half substitute Eric Gonzalez broke free on the left-wing and beat the goalie near post for the final goal. It was Gonzalez’s first goal for the academy in the three years at GSA.

RSL did concede 2 goals in the game. The first was in the 10th minute when Arsenal countered and the second a remarkable shot. After Sasivarevic’s first goal, on the restart, an Arsenal player took a shot from halfway and scored a spectacular goal.

With the victory RSL’s U18’s finished in second place. They are tied with the LA Galaxy on points but the Galaxy have a better goal differential giving them the Division crown. RSL also looks like they have secured a pot #1 draw in the U.S. Soccer Development Academy Playoffs which will be drawn on June 17th. 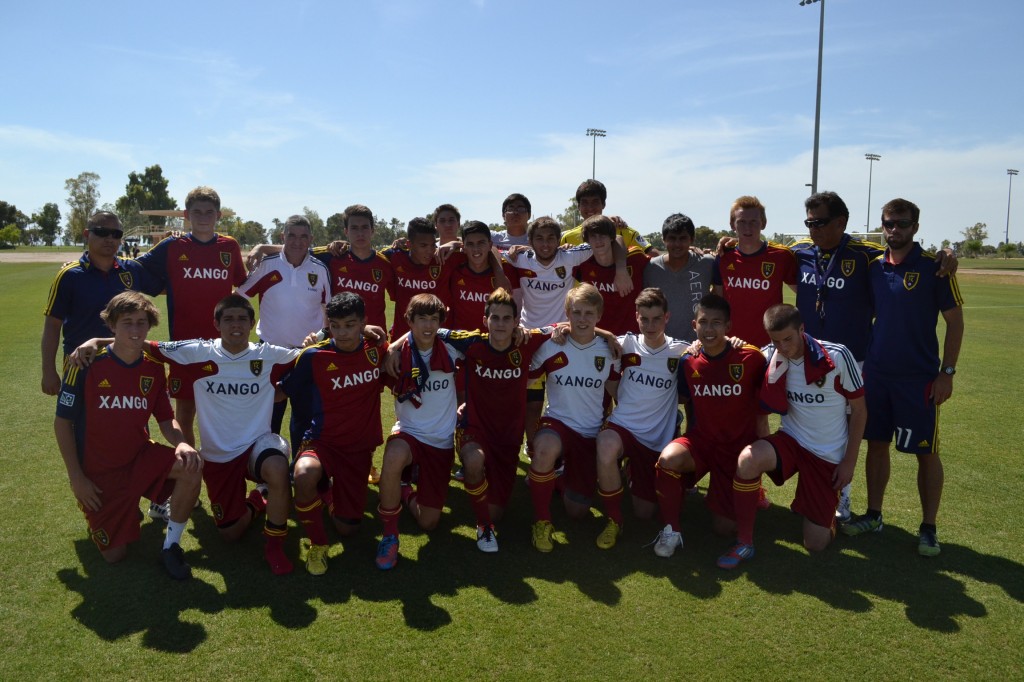 Pictures from the game here

Real Salt Lake U16’s already secured second place in the Southwest Division and needed one last strong showing to remain in the second pot for the U.S. Soccer Development Academy Playoffs. A 1-1 draw with Arsenal FC may not seem like the ideal result but the one point secured in this game will keep RSL in the second pot.

By remaining in the second pot, RSL will avoid having to play tougher competition in group play.

RSL started off well scoring in the 20th minute when Damian German pounced on a loose ball in the box but an unfortunate defensive miscue 5 minutes into the second half saw Arsenal equalize the game.

Chances in the game were limited for both sides due to the strong defensive performances. RSL’s defense lead by Dillion Nino and Jason Eng were active early blocking Arsenal shots and cutting off Arsenal attacks. Eng also started RSL’s most dangerous attack in the 30th minute when he and Josh Doughty connected for a quick counter up the right-wing. Doughty laid it off to Evan Waldrep who’s shot was deflected out.

After Arsenal’s goal, Damian German produced RSL’s final 2 chances. In the 48th minute he chipped the ‘keeper but put a little too much on the ball as it sailed over the crossbar. His last chance came in the 65th minute when his shot from the side was saved by the Arsenal ‘keeper who had to lay out.

Arsenal had one final chance but were once again stopped by Nino who had a stellar performance in the regular season finale. RSL closes out the season W17-L6-D5 and finished in second place in the Southwest Division, the highest finish in franchise history.