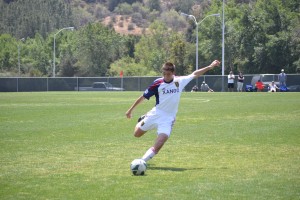 Real Salt Lake Academy U16 team traveled to Los Angeles this past weekend for some big games against Chivas USA & LA Galaxy. Below are the recaps and pictures from the games.

It has come down to just a few games left for playoff positioning and RSL, third place in Southwest Division, needed a big weekend to overcome second place Real So Cal and first place Chivas USA. And with the first game against Chivas USA, RSL looked to start things off on the right foot.

RSL however started things off on the wrong foot when in the 8th minute thy went down a goal due to a poor defensive pass out of the back that left everyone out of position. Two minutes later RSL answered back when Damian German played a ball up to Brooks Lennon from a quick restart on a free kick. Brooks wasted no time and tucked it away into the far post equalizing the game.

RSL then looked a little more inspired and started to play better, but poor passing in the final third held them back. Chivas USA looked to grab the lead in the 22nd minute but were stopped by Dillion Nino who prevented a goal when he cleared a dangerous ball. Chivas USA kept applying pressure and they grabbed the next goal in the 27th minute and another in the 35th minute to go into the half with a 3-1 lead. The two goals being scored off of defensive mistakes that turned into counter attacks.

Chivas USA wasted no time in the second half scoring again in the 42nd minute. RSL went to their bench and brought on players Evan Waldrep, Aaron Herrea and Alex Knox who greatly improved RSL’s chances with some physical play and crisp passing. Their hard work paid off when Knox got tackled from behind in the box after receiving a Herrera pass. Knox stepped up and converted the goal. His second on the season.

RSL didn’t have much left after this and a crucial clearance by Herrea kept the game at 4-2 which ended minutes later.

After losing to Chivas USA, the game against Galaxy wasn’t a must win but the players acted as if it was. Three points would keep their chances alive for a top 2 spot in the Southwest Division and no points would greatly ruin any chance for a late season push with just 2 games remaining after the Galaxy match.

Both teams spent the majority of the first half kicking the ball around. Moises Rodriguez, back at LB for the second time this season, impressed early on stopping many Galaxy attacks on the wing. RSL had two chances on goal in the first half the first coming in the 28th minute when Luis Lopez sent a ball through traffic that was deflected out and again in the 37th minute Brooks Lennon took a shot that went well wide. Other than these two chances there wasn’t much else for RSL in the first half.

RSL made three substitutions at the beginning of  the second half bringing on Bofo Saucedo, Jason Eng and Alex Knox who all provided an immediate spark. In the 43rd minute Brooks Lennon played a ball into Damian German who took a touch and fired over the net. RSL had a huge opportunity saved in the 55th minute from a corner. The ball sailed to the top pf the 18 and Dillion Nino headed it back into the box. Justen Glad then headed it far post and the Galaxy GK made a diving save pushing it out to keep the game scoreless.

RSl continued to apply pressure and it finally paid off in the 69th minute when Fito Ovalle forced a turnover in the Galaxy half. He then sent a looping ball to Brooks Lennon who dribbled into the box slotting it to the right giving RSL the lead. Moments later RSL doubled their lead when Damian German sent a free kick up to Lennon. He collected the ball and and shot far post giving RSL the 2-0 lead.

With the lead in hand RSL had to play some stellar defense and GK Chase Bishov had quite the performance in the final minutes. A PK was called against RSL in the 73rd minute. Bishov saved the shot and no one on RSL cleared the ball which gave a Galaxy player ample time to collected himself and score. Bishov then made made three more saves to keep RSL on top which gave them the 2-1 victory over Galaxy.