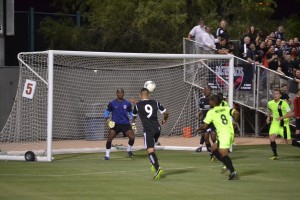 During the summer break hundreds of collegiate players from all over the United States enter the ranks of the USL Premier Development League (USLPDL). It allows college players to play high level competitive soccer without losing their college eligibility. Hundreds of players, who are now professional, played in the PDL and numerous USMNT regulars like Geoff Cameron, Graham Zusi, Brad Evans, Herculez Gomez played a few seasons for teams all over the U.S.

As players leave the Grande Sports Academy and head to college a few have joined up with a PDL team for the summer and we will be providing weekly updates on their performances. As of right now there are three former players in the PDL and here is how the did this past week.

As mentioned above, FC Tucson upset USLPRO side Phoenix FC in the first round of the U.S. Open Cup. FC Tucson qualified for the Cup due to their finish in the standings last year. FC Tucson played an excellent game and were able to score two goals late. The equalizer in the 82nd minute and the game winner in the 92nd. Velasco had an outstanding game almost scored in the first half but his header that went to the far post was cleared off the line. Grande Sports Academy had a chance to catch up with Velasco after the game.

Grande – How special is to for you to play in AZ?
Velasco – “It’s fantastic that I get to play in front of my family and friends in my hometown. I’m actually from Tucson as well and I lived here for a couple of years so it’s more special for me because of my friends and family.”

Grande – Anything you are going to work on this summer?|
Velasco – “Just getting better day by day. Working on my fitness and getting to that next level. Work on the strength because in the higher level it gets very physical and very fast. I want to improve every day whether I’m in school or not.”

Grande – Do you see the PDL as a way to improve?
Velasco – “It’s a very big stepping stone. You are going to see more people from the academy starting in it because it’s a higher level. You have no idea who is watching, a pro team or even a Division I school.”

Grande – Are you going to take a trip to GSA?
Velasco – “I’m going to try to take a couple of trips. I’m still not done with school and I try to come down for games but my whole childhood was the grande so I have to go back.