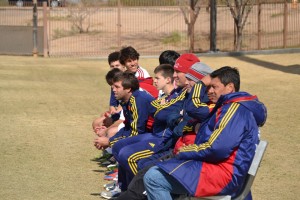 Another Friday, another victory for the Fabulous Wapo’s. Looking like the Harlem Shake, soccer style. The Wapo’s destroyed the dreams of the Tronkihno’s newest signing Te (Baaarbaaara) Wihongi, with a score of 7-6. Led by the mercurial Martin Vasquez, who terrorized Eric (why does this always happen to me) Gonzalez with five assists.

Natcho (Natcho-Natcho-Man) Hernandez, signed in the January transfer window, for some beads and other paraphernalia, held the defensive line along with Freddy (go on try to get by me) Juarez. The Tronkihno’s forwards Renzo (still trying to find the ball) De Olave and Mauricio (no goal) Nieto could not find their way past the Wapo’s goalie, Big Tim( no hit, no hit) Seketa and, Sirhat ( The Young Turk ) defensive wall.

On the contrary the Tronkihno’s portero, Octavio (I’m only the goalie because I have gloves) had a tough night as the Wapo’s peppered his goal from all angles. Despite bringing in a couple of gunslingers from New York, Tommy and Z (we did not understand the level) the Tronkihno’s could not get their first win of the New Year.

In his debut for the Wapo’s, Garrett (I couldn’t fill the Slovenian’s big shoes) Cleverly brought his silky skills to complement the speedy Tony (the Flash) Bruce in the Wapo’s attack. Bruce, who last played with Moses on the Red Sea team, scored two goals more than Eric and Te combined. The other Tronkihno’s new signing Andres (WOW! These old guys a good) was shocked that he could not penetrate the Wapo’s defense.

Top scorer with three goals Mike( this is too easy) Kraus strolled through the game as he was man marked by Te at least that is what Eric told us in the news conference after the game.

The Tronkihno’s will try to get on the winning track (No Chance!!) next Friday but don’t hold your breath.