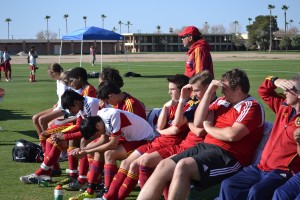 Without their Canuck midfielder Headen (my foots ok, honestly) Turner, Eric (we lost AGAIN, HONESTLY!!!!!!!) Gonzalez, could not pull his team together as big Te ( I’m not a midfielder, honestly )Atawongi and the rest of the Tronkinho’s crashed to defeat at the hands of the FABOULAS WAPO’S.

Evan( I thought we would lose by more, honestly)Waldrup and Jason( I’m going into hiding, honestly) Eng could not hide their disappointment appearing in their first Champion’s League game as they were run into the ground by the Wapo’s  midfield led by Mike (this is too easy) Kraus and Miha (I’m Back) Kline.

Up front The Wapo’s front runners Martin (The Flash) Vasquez and Tony (golden boot) Bruce destroyed the defensive backline of Pato (I need lots of help, honestly) Cevallos. Up front for the Tronkiho’s Renzo( I could not find the ball, honestly) De Olave, continued to wander the fields of Casa Grande looking for the ball as he was shut down by Nacho (the Red Shark) Hernandez who covered the whole left side of the field with his patented slide tackles.

Making his debut in-goal for the Tronkiho’s was Chris (My gloves don’t fit, honestly) Braybrooks, who’s baptism of fire came as Freddy (now I can go get a work out) Juarez strolled through the game and Wapo’s goalie Tim (No hit!! No hit!!) Seketa spent most of his time watching his midfield and forwards movement and goal celebrations.

Now with a 50 game winning streak the Faboulas Wapo’s are thinking about maybe having a training session or two to combat the Tronkiho’s next losing effort in a week or two but as most observers know the Tronkinho’s have only two chances of winning Slim and none and Slim has left town, HONESTLY.