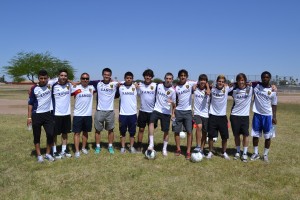 Every Friday morning the coaches & staff play a “friendly” soccer game against some of the Academy players who have school off.

Another Champion’s League thriller that ended in another Tronkinho’s defeat. With the return of Haeden(pick up Et…. ! To late he scored another) Turner and new recruit Andres(I want to go sit under my tree and meditate) Irigoyen the Tronkinho’s thought they had a chance but the dynamic duo of Martin (power, strength and finesse) Vasquez and Tony (Get Ton…. too late he laid it off to Eti again) Bruce recorded around 10 goals in the game bringing their combined total in champions league to around 150 goals as the Wapo’s undefeated streak increased to 300 games.

Te (I keep shooting but Nacho keeps saving them) Wihongi and Jason (Close down Marti… too late another goal, I think that’s number 14) Eng tried to raise their game but Mike ( TRACK STAR, ROCK STAR the fans know) Kraus and Freddy (scoring goals is fun, I don’t even need to defend) Juarez dominated in the midfield.  Tronkinho’s goalkeeper, well that’s what they told us!! Jon (What do you mean dive I’m a central defender not Greg Louganis) Stadler was tortured by his own back one as they crumbled under the Wapo’s onslaught. Regular goalie Eric (Vampiro) Gonzalez was a no show as it was too bright for an appearance.

Left all alone the one Mousekateer Octavio (I could have got an earlier flight home) De La Torre was missing Pato (Queretaro here I come) Cevallos and Renzo (I saw some of the goals from the plane) De Olave as he struggled to score against Nacho (Te can’t score) Hernandez. New coaching recruit, Eti (Wow!! These Wapo’s are good!!!) Tavares could not believe the level as he moved from Academy to College to Champions League.

Try as they might the Tronkinho’s just could not get over the hump as they now have to play some qualifying games against Casa Grande Elementary and the Sister of Mercy’s co-ed under six teams in the coming weeks. Qualifying will be tough but we have confidence they will find a way.