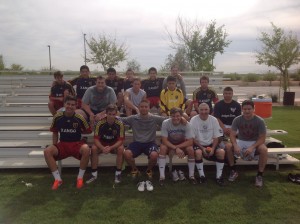 Every Friday morning the coaches & staff play a “friendly” soccer game against some of the Academy players who have school off on Friday’s.

Casa Grande and FIFA dignitaries including Mr. Burks stood in amazement as the Wapo’s started the game with a five goal explosion. The three Mousekateers, Pato (I scored five and lost, can you believe it) Cevallos, Renzo (we found him. He was in the locker room all the time.) De Ovale and Octavio (we could have won if we scored more goals.)De La Torre trudged off the field talking to themselves wondering where it all went wrong.

Led by Martin (I chip Eric for fun) Vasquez and his partner in crime Tony (Pelon) Bruce the Wapo’s continued on their path to glory. Te (Shoot from anywhere) Atawongi could not beat the Wapo’s magnificent Portero, Nacho (Nacho Supreme) Hernandez and the defensive wall of Freddy (thou shall not pass) Juarez and Mike (another walk in the park) Kraus.

Garrett( the Arizona Assassin) Cleverly even joined in with a goal or two as the Tronkinho’s  crashed to another defeat against the world renowned FABULOUS WAPO’S. The Champion’s league will continue in a week or two as the Tronkinho’s will have to go the preliminary rounds against Casa Grande Elementary school(co-ed division), The Gerber Institute (under six) and other powerhouse teams before coming back to challenge the reigning world champion Wapo’s.