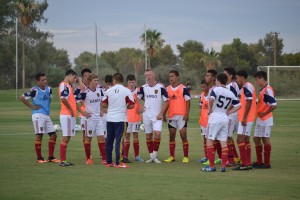 CASA GRANDE, Ariz. – U.S. Soccer Development Academy has released a tentative schedule for the Real Salt Lake U-18 & U-16 Academy teams for the 2013-14 regular season. Locations and times for the majority of games have not been released and coaches may move a game for various reasons as the season progresses. The schedule below should give family, friends and fans a general idea of where the RSL Academy will be during the season.

The RSL U-18 & U-16 teams are coming off of successful seasons that saw them both finish in second place in the Southwest Division, advancing to U.S. Soccer Development Academy Playoffs for the third consecutive season. The U-18 season came to an abrupt end when they were eliminated in the group stages. The U-16’s won their group and advanced to Finals Week for the second time in the three-year history of the RSL-AZ Academy. In the 2010-11 season, the RSL U-16 team finished in third place at Finals Week.

At Finals Week, the U-16 team won their group and defeated Solar Chelsea 4-2 in the U.S. Soccer Development Academy Championship Game.

The schedule below is once again a tentative one. GSA will update the schedule once other details have been released.