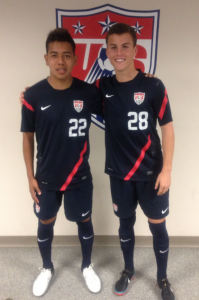 The players have been in California for the past week and played their first game against the U15 MNT last night. US Soccer divided up the squads which allowed two games could be played. Lennon and Saucedo both played in the second game that was won by their side, 4-2.

Lennon was a terror in the field scoring 1 goal and proving the assist on two more. Saucedo also drew rave reviews for his defense in the final minutes of the game and also provided an assist on a goal.

Grande Sports Academy had an opportunity to talk to the players after their games last night. Below are their thoughts.

Lennon – “Camp is going great. The coaching is fantastic and the players are all good! I’m very happy to be a part of this group.”

Bofo – “I didn’t know Brooks was coming to camp. I was eating lunch and I see him walk in and I just felt more confident.”

GSA is so proud of out players accomplishments. Keep up the great work Brooks and Bofo! 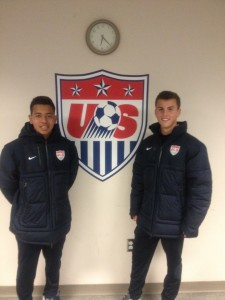 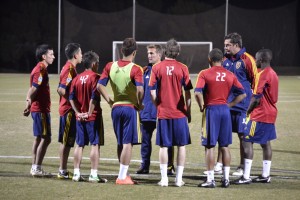 The boys looked very impressive out on the pitch and Sebastian “Bofo” Saucedo brought the house down when he converted a bicycle-kick that had all the pros cheering and declaring that “practice is over”.