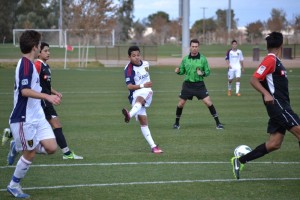 “The win was very important because we are playing against a team in our division and we’re at home,” said Head Coach Martin Vasquez. “Our U16 team continues to stay in first and be in the top 1 and 2 teams in our division.”

Throughout the early parts of the first half RSL-AZ and Strikers FC struggled to find a rhythm. The first real chance for either team came in the 12th minute when a Strikers FC player passed the ball into the box that was cleared by RSL-AZ’s Alex Knox.

Twelve minutes later RSL-AZ capitalized on their opportunity when Brooks Lennon pounced on a through ball and scored low right. RSL-AZ then went into the half with a 1-0 lead.

“At first it was tough getting into a rhythm”, said Fito Ovalle. “At halftime Martin talked to us and said we need to calm down and possess the ball.”

RSL-AZ started to pull away in the second half when Bofo Saucedo stepped up and hit a free kick from 19 yards out. Bofo kicked the ball to the left side of the net beating the Strikers FC GK high.

Three minutes later Bofo scored again when Brooks Lennon dribbled the ball into the box from the right-wing. His cross took a deflection off of a Strikers FC player and found the foot of Bofo who calmly took his time and scored a very smart goal.

With 5 minutes remaining in the game Diego Silva who was having a stellar performance playing left-back ran into the box receiving a pass. The ball got tangled up between him and two Strikers defenders. Diego who tripped, stood back up and swung around shooting the ball at the net and scoring RSL-AS’s fourth goal of the game.

“It felt good, I’m happy I scored,” said Silva. “It was really exciting because I was having a good time making runs. They (RSL) couldn’t find me and I had to yell at them. The last play before I came out I finally had a chance to score.”

Vasquez spoke about Diego’s and Bofo’s play in the second half saying, “It’s great to see somebody (Diego) work so hard and at the end get rewarded. Just like Sebastian his performance getting those two goals shows that it pays off for their had work. Especially Diego because he is a defender and his work rate was tremendous.”

The win for RSL-AZ maintains the 5 point difference between them and second place Chivas USA U16.

Next game for RSL-AZ U16 is on Saturday, February 16th when they host San Jose Earthquakes. Game time is 1:30pm.

NOTE: RSL-AZ over the past three games has outscored the opposition 15-1.