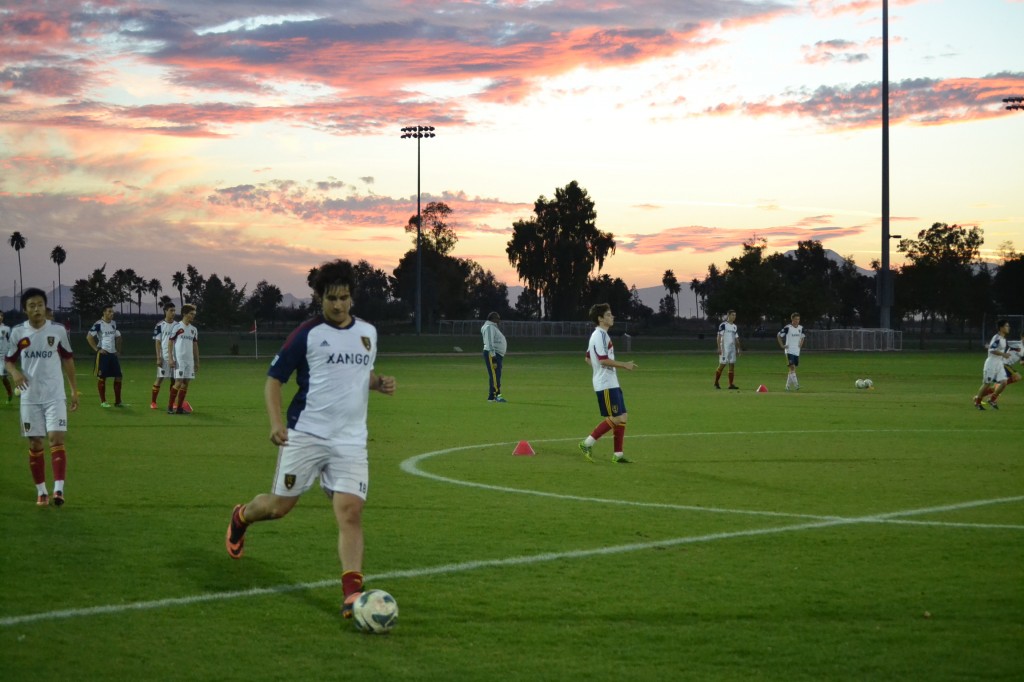 Grande Sports Academy Soccer News – Real Salt Lake – Arizona soccer academy’s adventure began with leaving 82 degree weather and bright sunshine on a comfortable motor coach ride to the cold and rain of Southern California. This weekends weather was a determining factor over the two days of soccer matches and had to be moved to turf due to the rain. Despite torrential rain and high winds both teams managed to play some nice soccer.

Real Salt Lake – Arizona’s U18 team started the weekend strong with a 3-0 win versus Strikers FC. Jordan Allen opened the scoring with a with a great run cutting in from the left flank before hitting an unstoppable shot into the goal. Ive Burnett got the second score with a shot from just inside the box on a nice feed from Maikon Orellana. Allen wrapped up the scoring with his second of the match, driving into the attacking third before slotting the ball past the Striker’s goalkeeper.

Real Salt Lake – Arizona’s U16 team continued the winning ways as Benji Lopez hit a superb free-kick beyond the outstretched arms of the Striker’s keeper. Jose Navarro put the team two up with a penalty kick after winger Andrew Brody was pulled down in the box. Real Salt Lake – Arizona continued to press, as the rain poured down, but could not add to their tally and came away with a 2-0 win to finish out the day.

Sunday’s games, against Pateadores, were not as kind to the Real Salt Lake – Arizona teams. The U18’s started well and took a quick 1-0 lead thanks to a nice combination between Jean Pierre Bello and Maikon Orellana. Casey Arick profited from the build up with a hard low drive that eluded the opposing goalie.

While the rain had eased off on Sunday, the wind was brutally strong and making the going difficult for the teams. Two minutes into the second half Pareadores tied the game up with a goal that was aided by the conditions as the Real Salt Lake – Arizona defense could not clear the ball as it skipped into the six yard box giving the hosts a 1-1 draw.

The U16 team started the game on fire, despite the cold, wintery weather. Jordan Allen opened the scoring with a beautiful free kick, bending the ball around the defensive wall and into the back of the net. Allen, now playing for the younger squad, showed his class as he drove into the Pateadores 18 yard box before driving the ball home for a two goal lead.

Real Salt Lake – Arizona second start was much slower than the first, as the Pateadores got a goal back after only a minute into the half. The Southern California team, playing their first game of the weekend, made it an even game after seven minutes and eventually went on to score two more goals as the Real Salt Lake – Arizona team looked battled after two games of a weekend of difficult weather conditions for the desert team.  Pateadores won the match 4 – 2.

Jordan Allen who has verbally committed to attend the University of Virginia, came away from the weekend with four goals, two for the U18’s and two for the U16’s.