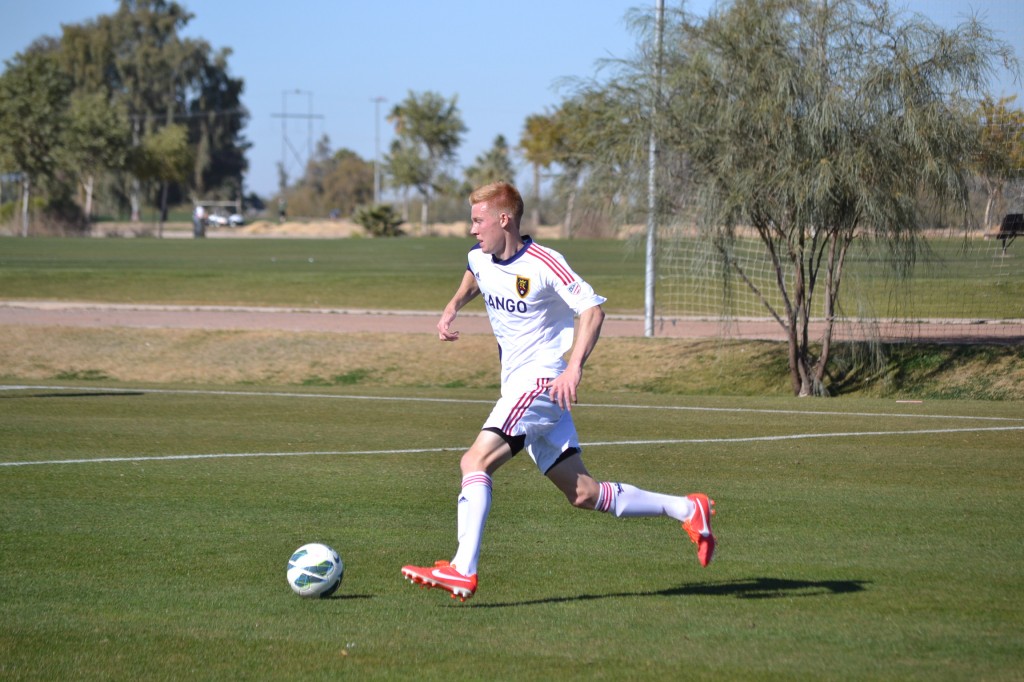 Revolution Head Coach Jay Heaps praised GSW as a perfect training facility after the game saying, “It really suits what we are trying to do. When you are starting your preseason you want to have the ability to have the set up with the weight rooms, pools and the food on site. You like to have the ability to play a MLS team and its a good opportunity to get players fit.”

A typical professional soccer game has 2, 45 minute halves. Today’s game was a little different with 3, 30 minute halves. This allowed the coaches to play numerous players and also made the game competitive as players are still getting back in shape.

“A lot of MLS teams stay here. It was a  good competitive game especially because we have a lot of guys,” said Peter Vermes Head Coach of SKC.

Below is a gallery from today’s game.

Busy times down here at the Academy as the Grande Sports World will be hosting Real Salt Lake and New England Revolution this week. The other day 7 of the Academy players had a chance to play with Real Salt Lake. Check out their thoughts on that experience here.

Below is a gallery of the best shots from the week. RSL and Revolution have been practicing at the same time the U-18 players train and it has been quite the scene to see all the fields being used.

Weekday notes are the newest feature to debut on the Grande Sports Academy website. Once per week we will be taking a look at all the happenings going on at the Academy, on and off the field.

As the boys returned back from winter break they spent the whole of last week helping out US Soccer with their coaching licenses for A, B, and C certification. Throughout the US Soccer practice the boys were assigned to a coach who would then lead them through multiple drills as a US Soccer representative observed the coach and graded that coach on a scale.

With the coaching licenses over and US Soccer off campus the boys have now been getting back into their normal routine, which includes cardio on Mondays. This past Monday was the first cardio day of the semester which left a few of the boys gasping for air after a long winter break.

“It was good. Little tiring as we’re getting back into shape. But overall it was good,” said Fito Ovalle. “I felt pretty good. Conditioning wasn’t as tough as I thought it was going to be because the coaches took it a little lighter on us. So I felt pretty good in the end.”

Assistant Coach Freddy Juarez  said after practice that they made sure to include more ball work into the cardio practice because the boys always put more effort into it.

Brandon Sands said he enjoyed all the agility drills especially the ones where they had to cut in and out of the cones with the ball.

With the first game of 2013 against Nomads SC a little more than 10 days away, Juarez said he was feeling more of a buzz and more excitement out of the players as things have gotten back to normal around the Grande Sports Academy.

The Marketing Manager position is the newest addition to the Grande Sports Academy’s staff. Garrett Cleverly, who worked as a sports reporter in Phoenix for the past two years as was the creator AzKicksIt.com, has been educating the boys on appropriate social media behavior.

Cleverly spoke to the boys, on Monday and Tuesday night, and explained to them how to use things such as Twitter, Facebook, YouTube etc. to the players advantage.

“All of the players want to play college or pro one day,” Cleverly said. “They need to know that when a college is considering them as a player, the college may look up their name on Google and the last thing a player wants is to miss an opportunity because he was saying vulgar things on Twitter.”

Throughout the rest of the semester, Cleverly will be working with the boys on various subjects from handling bad press, how to say things correctly in an interview and how to further use social media to a players advantage.

As it has been customary here in the early months of the New Year, MLS teams are just days away from arriving at the Grande Sports World. On Monday, January 21st, Real Salt Lake and New England Revolution will be the first teams to check in. After that, the Vancouver Whitecaps are set to arrive on the 28th, and then the Seattle Sounders on the 30th.

For the boys who have been at the Academy for the past few years some are already counting down the days before the players arrive. A chance to catch a glimpse at their favorite player can be summed up quite easily.

For the next two weeks the boys will have a chance to watch the MLS team’s practice and exhibition games that they will be playing at Grande Sports World. New England Revolution released their schedule here.

Turner went on saying, “It’s just a dream. Everybody likes to watch soccer on TV, but watching it live is even better. These guys are your role models.”

Grande Sports World is going to be home to four MLS over the next few weeks as the teams train and prepare for the regular season which kicks off on March, 2nd. The first two teams, Real Salt Lake and New England Revolution, will be checking into the Grande Sports World on Monday, 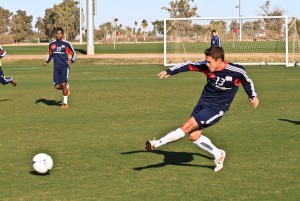 The teams will also be holding open exhibition games to the public. The New England Revolution have just released their schedule. Other team schedules to be released soon.

Last year the Revolution as practiced at Grande Sports World. Here is Head Coach Jay Heaps talking about the experience.

The Real Salt Lake U-17 team bounced back from their previous performance and defeated the New England Revolution, 4-2 in an exciting soccer match. Another warm and sunny day in Frisco could not slow down the action in this Generation adidas Cup match. RSL held the possession early and would not relinquish it. Ben Spencer and Cole Nagy were creating for RSL, both played well throughout the match. Nick Semintendi opened the scoring for RSL and was active attacking the Revolution defenders. The second half provided end to end action, goals and drama. RSL striker Jordan Allen scored a beauty and put RSL up 2-0. The Revolution did not quit and would score twice to pull level. Revolution player Deguy Ngatcha had a chance to put the Revs in the lead but failed to convert on his rebound. The RSL side would continue their attacking ways and would find the net two more times. Kainoa Bailey’s clinical goal put RSL up 3-2 and the team would not look back. The 4-2 victory for RSL was well deserved. The team dominated the match from the start and finished their chances. Despite not playing for silverware, the Real Salt Lake U-17 team has given maximum effort.