Miguel “Miggy” Salazar was enjoying a successful freshman season at Elon University. The team was 13-4-2 and was just one more victory away from securing a spot in the Southern Conference Tournament Championship Game. Miggy was a key player for Elon starting in 19 games and was recognized for his play when he was named to the Southern Conference all-freshman team two days before the semifinal game.

However all the success Miggy had built up came to an end in just one play. In the semifinal game vs Georgia Southern Miggy went up for a header in traffic. A Georgia player, who also went for the header, hit Miggy around the right temporal side fracturing three different parts. Miggy was subbed out of the game and done for the season. Elon went on to win the game and then defeated Wofford, 2-1, in the Southern Conference Tournament Championship Game.

Elon advanced to the NCAA Tournament and was eliminated in the first round against Costal Carolina, 3-0. 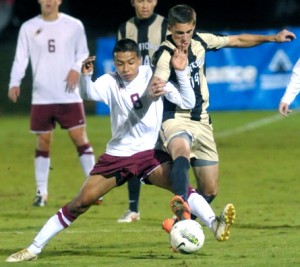 Miggy has recovered from his injuries and is looking forward to a successful spring with his team and a productive summer. Grande Sports Academy caught up with Miggy over the weekend. Here is how our conversation went.

Grande – You had a very busy freshman year, how is spring soccer gong so far?

Salazar – “Yes, my freshman year has been very busy especially in the fall but soccer is going well even though we have lost some great players that brought a lot to the team.”

Grande – You played in a lot of games and helped your team advance to the playoffs. What did you learn from last season that you can take into this season?

Grande – Did playing at GSA help you in your preparation for the first year in college?

Salazar – “Definitely! The soccer program is one top programs in the country. This program helped bring the best out of me and I hope I can continue growing as a soccer player at the collegiate level. Furthermore the program prepared for college because I lived on my own and that made me an independent person. I will always be grateful for my years there.”

Grande – You are from Tucson, what initially made you want to come to Grande?

Salazar – “My story of coming to GSA is long but basically there were 5 of us from Tucson that were invited to tryout and only 3 of us made it and fortunately I happened to be one. But I owed it to my friend Morgan and his dad because they persuaded me and took me to the tryouts because I didn’t want to come after the second try out. But thankfully Morgan pressured me to go.”

Grande – Lets talk about your freshman year a little more. How did it go this past season at Elon? Do you have any fond memories from last season?

Salazar – “My freshman was really awesome because I was fortunate to get a lot of playing time which made me gain a ton of experience for the future. We had a successful year winning the the regular season and tournament but we didn’t advance to the second round of the NCAA tournament which very disappointing since it was one of our goals for the year. Also, at the end of season it was very painful for me physically and emotionally because I had the worst injury in my life. I fractured my right side of my face in three different parts and consequently I got to watch my team play in the final of the Southern Conference tournament and the first game of the NCAA tournament from the bench.”

Grande – Spring soccer is a time to improve and work on things. Is there anything special you have been working on?

Salazar – “During the spring I have been working on getting stronger and quicker on the ball. But also, have put a lot of work trying to get better at finishing in the final third of the field such as shooting from long distance and heading with power. In addition, I have been trying to figure out how I can try to help my team mates by being a great leader.”

Grande – What are your plans for summer. Possibly playing PDL?

Salazar – “Yes I am trying to play for FC Tuscon this summer and also hopefully visit GSA an maybe practice once or twice with my old friends.”

Grande – Thanks for catching up with us.