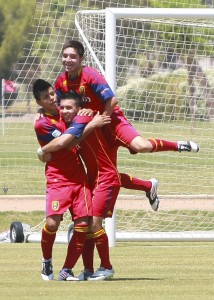 In only its second year of competition, the  Grande Sports Academy’s soccer team, Real Salt Lake – Arizona, has again qualified for both the U15/16 and U17/18 USSDA playoffs. RSL-AZ teams ramp up for the playoffs as they begin to focus on playing in the June 25th tournament in Frisco, Texas.

The first round of Academy Playoff play contains 8 Groups of four teams. The winner of each group advances to the Development Academy Finals Week from July 16 -23 in Houston Texas.

RSL-AZ U17/18 garnered a third seed in Group 5 along with FC Dallas from Frisco Texas, Sockers FC from Palatine Illinois, and McLean Youth Soccer from McLean Virginia.

RSL-AZ U15/16 secured a second seed in Group 4 along with the Chicago Fire from Bridgeview Illinois, Seattle Sounders FC from Tukwila Washington, and the Clearwater Chargers from Clearwater Florida.

The U17/18 soccer squad finished the season in third place in the SoCal Division of the West Conference with 31 points.The team scoring leader Maikon Orrellana ended the season with 13 goals. Joining Orrellana is Danny Gavin and Jordan Allen with 7 goals, Etiandro Tavares with 6 goals, and Dylan Kelly with 5 goals.

The U15/16 team finished the season in second place with 34 points. Jose Navarro lead the team in goals this season with 15 goals. Andrew Brody contributed 9 goals and Trevor Hyman kicked in 7 goals for the season.