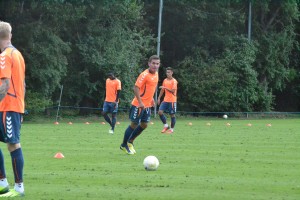 COPENHAGEN, Denmark – When Mikey Orellana graduated from the Grande Sports Academy in 2012, he had his eyes set on playing in Europe. He had a tryout tour set up for numerous clubs in different countries. Then a half-hour into Orellana’s first tryout he suffered an injury that would plague him for the next year, which kept his dream of playing professionally on hold for some time.

Orellana is now a year removed from that injury and is sitting in the Brondby IF team cafeteria with a professional contract signed and recounting the journey that led him to this historic Danish club. As he wraps up the story he takes a deep breath and looks off into space and sums it up as a nightmare he will never forget.

“Some people look at injuries as a big bad thing. I look at is as a good thing. It’s like life, you go through bad times and once you get through it you feel better. That’s how injuries are to me. As soon as something happens I know I’ll come back a lot stronger.”

Orellana’s path to becoming a professional player can be traced to a chance encounter with former Real Salt Lake player Freddy Adu. Orellana grew up in Utah and attended a soccer clinic RSL hosted. After the clinic ended, Orellana took the ball and performed some juggling tricks, which impressed Adu who called the coaches over to witness this nine-year old player. Orellana now on RSL’s radar was brought up by the club and played two seasons for the Academy. With options in place to play for a college program Orellana set his goal a little higher; Playing professionally, and the fastest way to make that happen was to go to Europe.

Thirty minutes into Orellana’s first tryout, which was with Brondby, he walked off the field limping. The first team coaches never saw Orellana play, but one youth coach did and Orellana’s performance was enough for the coach to convince the organization to take another look at the promising player.

Orellana rejoined the team in December and suffered another setback twenty minutes into the tryout when he walked off the pitch injured. Coaches waited for Orellana to recover and their patience combined with Orellana’s drive paid when he returned fully fit three months later scoring 3 goals in 5 games for Brondby’s reserve team.

His story above is a simplified version of what he went through and as Orellana has pointed out before, “that’s the story pretty much. A lot harder when you are going through it, but much easier to say it like that.”

Brondby made a contract offer after the reserve team performances and Orellana signed his first professional contract in June; just weeks before he was schedule to participate in the U-20 World Cup with El Salvador. However, as has always been the case with Orellana, his streak of good luck ended when he suffered another injury this time at the U-20 World Cup.

“It was great. If I would do anything differently I wouldn’t. Even though I was injured I got an experience that I will never forget. Even though bad things happen you have to look at the good things.”

Orellana’s credits his positive attitude to the journey saying it has humbled him a lot.

“It helped me find myself as a person. You don’t know who you are. It’s hard to find yourself when you’re doing well. Once you’re on the bottom you really understand who you are. You have to become that person to comeback.”

Orellana has been on the bottom countless times and he says it suits him better when the odds are stacked against him. The odds this time are proving to the coaches they made the right decision in signing him. Orellana is still recovering from the U-20 World Cup, but after watching him for 5 minutes on the training ground he shows no signs that he isn’t fully fit. He has always been credited with blistering speed and a relentless pursuit of always pushing forward. Because of the injuries, he has to adapt his game and now sports a powerful left foot he developed as he lets his other leg recover.

Orellana now has his eyes set on joining many of his former teammates from the Grande Sports Academy who have made their professional debuts in 2013. When asked about where he pictures himself 5 months from now he says, “My first goal is getting back 100%.” He pauses then confidently adds, “After that anything is possible if I’m 100%.”