To keep everyone up to date with all the happenings going on here in Dallas we will be proving wall-to-wall coverage every single day with pictures, video and a blog entry. 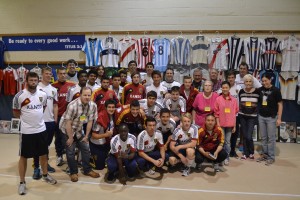 local church for an outstanding lunch provided by the staff and volunteers. After lunch the players were given the opportunity to either stay at the hotel and rest/work on homework or head over to the 6th Floor Museum, the location when Lee Harvey Oswald shot President John F. Kennedy.

Before bed we all went over to Olive Garden for a big dinner.

Going into the quarterfinals, Real Salt Lake and IMG  knew the importance of the match.

Note: CB Santi Carrillo was suspended for the match due to back-to-back yellow cards in the previous two games.

As it has been the case for RSL in every match in Dallas a strong wind blew throughout the entire game. RSL attacking into the wind found themselves down a goal within minutes after a IMG counter attack. GK Luis Barazza blocked two shots in quick succession but the rebound from the last shot found the head of a IMG player who put it into the back of the net.

RSL behind for the first time this tournament struggled to find a rhythm after the goal. Passing wasn’t as crisp, free kicks missed their mark and turnovers in the midfield held RSL back for the majority of the match. However, RSL continued to fight and had their first chance in the 30th minute when Jose Hernandez played a ball up top to Coco Navarro. He collected the ball just outside of the 18 and took two touches that were both a little too strong as the IMG GK ran out and collected the ball.

Minutes RSL missed out on a big opportunity to equalize when Andrew Brody crossed a ball into the box. A IMG defender had his arm extended which blocked the ball in front of the linesman. RSL screamed for a handball in the box but their efforts were not rewarded as the ref let play go on.

RSL found themselves down another goal right before halftime when IMG countered again. Barazza came out to challenge the attacking player. The player dribbled around a diving Barazza and took a shot that hit off the back post and into the goal.

With heads hanging low RSL went into the half down 2-0. RSL came out the whistle a little stronger than IMG but failed to connect in the final third. This remained a constant theme for RSL in the second half. They found themselves down another goal in the 60th minute when IMG scored again. RSL had a few more opportunities but were held back by a strong IMG defense that kept numbers behind the ball. When the final whistle blew IMG had defeated RSL, 3-0.

Though it wasn’t the finish the team wanted the players were pleased with the overall success they had in the tournament.

After the game the players went back to the hotel and rested before the drive back home.

The bus departed around 10am for the near 20 hour drive back to Casa Grande. We stopped along the way for some food and watched some movies but were mostly entertained by the Mafia game Assistant Coach Mike Kraus coordinated. We arrived at the Grande Sports Academy around 3am and all went to bed seconds later.

Thank you everyone for the support this past week!