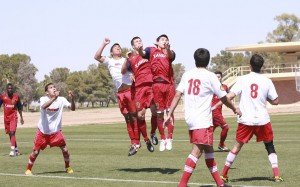 Boy soccer players born in 1996 & 1997 will have the opportunity to showcase their skills and meet the RSL Youth Academy coaches. Tryout participants have the potentially to enter the ranks of the RSL Youth Development program while at the soccer tryouts, which will be hosted at The Alexander Dawson School located at 10845 West Desert Inn, Las Vegas, Nevada. There are split session tryouts based on the birth year of the players.

Coaches and staff of both the RSL-Arizona Academy and RSL-Utah soccer programs will be in attendance to evaluate the talent on-hand during the tryouts. All players will be required to pre-register for the soccer tryouts, including payment of the $40 registration fee (no walk-up registrants will be accepted), the cost includes a RSL U-17 Tryout T-shirt. Registration must include completion of the following items, which can be accessed at RSL Academy Tryout Page at RealSaltLake.com:

Registration can be submitted using the following methods:

The Real Salt Lake Youth Academy tryouts will consist of several games, practices and exercises designed to show the coaching staff the player’s range of ability, skills, speed and athleticism. It is an informal session, aimed at giving players the opportunity to display their talent and to obtain an assessment of their potential from a Real Salt Lake – Arizona Academy Staff Coach.

The Real Salt Lake Youth Academy has a professional responsibility to practice common courtesy in responding to individuals as quickly and efficiently as possible. After being determined a top player by the RSL Academy staff by performing well on the tryout date, players will be invited back to participate in further RSL Youth Development Program activities. Real Salt Lake Youth Academy staff will work together on determining the right mix of players based on strengths and weaknesses of individuals, group and team performance.

The crowning jewel of Real Salt Lake’s Youth Development endeavors is the RSL-Arizona Academy, the United States’ first soccer residency program affiliated with a Major League Soccer club. Based out of the state-of-the-art Grande Sports World training facility in Casa Grande, Ariz., the goal of the RSL-Arizona Academy is straightforward – to teach the next generation of potential Real Salt Lake players how to train and play “the RSL way” while providing them with a quality education both on and off the field. Headed by one of the most experienced coaching staffs in the country, the RSL-Arizona Academy is currently in its second season of play in the U.S. Soccer Development Academy, the country’s highest tier of youth soccer featuring 78 clubs fielding teams in both the U-15/16 and U-17/18 age groups.