CASA GRANDE, Ariz. – Last week Major League Soccer held their annual SuperDraft. As some supporters groups cheered while others jeered when the picks came in, pundits of the draft noted that the lack of overall talent in the draft is signaling an important change on the American soccer front.

That change was seen at the Grande Sports Academy when Carlos Salcedo became the third player from the Academy to sign with the Claret-and-Cobalt.

“Carlos is a leader and has been a leader since the day he got here,” said RSL-AZ Academy coaches. “He is very composed on the ball and he had to get mentality better which he did. He also raised his game and on the field and he raises the game of people around him.”

Salcedo did not see any first team minutes in the summer, but played in a handful of Reserve League matches. He, along with first team coaches, are hoping that a successful preseason camp with the Claret-and-Cobalt in January can turn into an professional appearance later this season.

Grande Sports Academy (GSA) had an opportunity to catch up with Salcedo for a Q & A:

GSA – What was the last year and a half like?

Salcedo – Well I think it was great. It helped me develop and to get to the next level, which is playing professionally. I want to thank all the coaching staff and Mr. Burks because they helped me to get to another level. It was a great if you want to be a soccer player to come to this complex. You come back from school and you play soccer and you can do your weightlifting after practice. It’s pretty much what every soccer player needs.

GSA – What made you come to the Academy in the first place? 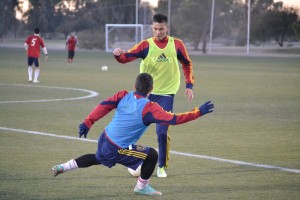 alcedo – The whole complex because once you get out from practice you get to work on your fitness. It’s like a professional team here. The weightlifting and the soccer fields are super nice compared to where I came come from. It’s pretty much all you need. The coaching staff is great with Martin, Freddy and John. They also bring good guest coaches in and that makes it really interesting. It’s such a great place to enjoy soccer and to play soccer.

GSA– You have returned back to the Academy. What was the thing you were most looking forward to?

Salcedo – I feel ready to take this chance and this opportunity to prove to the guys from the first team that there is good talent in the Academy. That is pretty much what I’m looking forward to and also getting some playing time with the pros.

GSA – Is it comforting coming back to a place you are already familiar with?

Salcedo – Yes, I think because I already love the weather and I feel home. This is my second home and I’m pretty sure I’m going to take advantage of that.