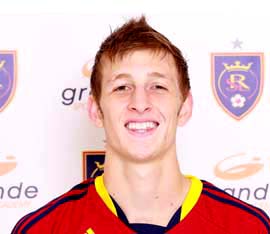 My name is Dylan Kelly and I play Forward for the Real Salt Lake – Arizona U18 soccer academy. I was born in Indianapolis, Indiana but I grew up in Tucson, Arizona. I have played soccer my whole life and I am proud to be a part of the Real Salt Lake – Arizona Academy team. This is my second year in the academy and it has opened so many doors for me. If it weren’t for my team and the coaching staff, my future would not look as bright as it does right now. Because of this team I am able to continue my soccer career at the college level. 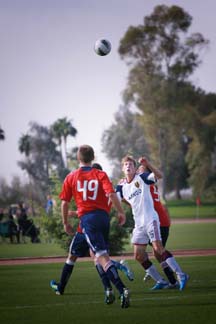 My experience at resident life at Grande Sports Academy was like no other! I got the chance to have all the access to soccer that anyone could possibly wish for. I could go out to the fields whenever I wanted (if I wasn’t at school or already practicing). I was provided with a nice cozy room with a roommate. Living on my own was a relief from all the stress back at home. I was also provided with good food in the lounge that never seemed to disappoint. The lounge was also equipped with two TVs and a ping pong table to use when I wanted to relax. All in all, living as a resident was good and a fun experience for me that I will never forget.

As a result from the program, the Real Salt Lake – Academy, my life and future have been changed for the better. 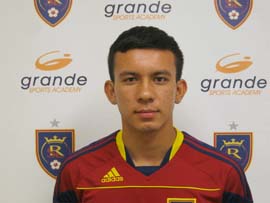 I was born in Los Angeles, California on May 16, 1995. I was raised in Inglewood and it is a city of trouble and gangs. I grew up knowing a few members of those gangs. I never got involved thanks to my beautiful family that kept me out of trouble. Being the first boy in my family after the birth of my two wonderful older sisters, I was also the first introduced to futbol by my father J. Socorro Navarro Martinez at the age of four years old. When I was beginning to start my youth futbol era, my parents decided to have my younger brother, adding another futbol player to the family. Thanks to my father and my gorgeous mother Maria Navarro, I grew up having an amazing family. Without my grandma, I probably wouldn’t be here because she helped my parents raise my sisters, my brother and I. Both of my sisters always cared for me and were always there for me no matter what. My little brother Richie even now helps me keep going and working hard. When we were younger we fought many times, but at the end of the day we love each other. He treats me like his role model and I work hard to never disappoint him. I could go on and on about my family because they mean the world to me and they are my support system. I want to use futbol, the love of my life, to make them proud.

The hardest part of coming to the academy was leaving my family. Not seeing them everyday has been hard, but has made me a much stronger person. The coaches are all great coaches, especially Coach Freddy. He always reminds me to stay humble and to keep my feet on the ground, which my teammates and I also like to call “tough love”. No matter how well I play, Coach Freddy always has a way to make me a better player on the field and a better person off the field. 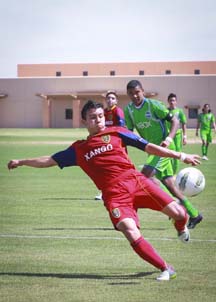 My teammates are the best friends I have ever had. They make me stronger and smarter on and off the field and they make futbol so much more fun. Our motto, “As One”, is very big in the academy because we are a family and fight for each other. I would go to war with any of my teammates because I know they would fight for me till the end, the same way I would fight for them till the end.

I’ve grown up dreaming of one day playing with Real Madrid. I know that is a big dream, but how my mother use to tell me “no cuesta soñar” or in other words, it doesn’t cost to dream. My goals are to play professionally and also to go to college. To reach my goals, I have to focus on school and on my team, Real Salt Lake – Arizona. With hard work and the help of my team and family I know I will reach my dreams. This year I want to help my team win Nationals. Last year we received third place, but this year we are going to take first! 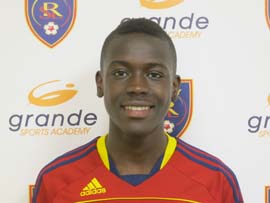 I was born in Guinea Bissau, West Africa in a town called Bunkulen. I moved to the United States in 2004 when I was ten to get away from the residual violence from the Civil War. When the war started in 1998 I was four, and my family and I moved several of times to get away from the violence and into safer areas. We moved from our home town of Bunkulen to a town called Mansoua because we thought we would be safer there. In Mansoua we would still hear gunshots every day, but we were not in the middle of the firefight that was going on in Bunkulen.  When the fighting slowed down, I was excited to go home. I could not wait to sleep in my own bed and play with my favorite toy, a wooden soccer ball that I would play with before going to sleep. However, when we got back to Bunkulen, I was devastated. Our house was destroyed. I remember looking at the house with tears in my eyes as a part of me had been taken away.

I came to the United States when I was ten years old. The first time I sat next to a white man was on the plane.  The whole time I was on the plane I was just trying to figure out how the plane worked and who made it. It just seemed so unreal to me. Although it took me two to three years to become confortable in English, I soon loved my American life. In the U.S. there was less violence, no firefights, less theft, no police beatings, no public humiliations, and teachers would not beat you.  But despite all the bad memories from Guinea Bissau, it’s also easy to get nostalgic. I miss the animals that were a part of my life – monkeys, snakes and porcupines. I miss going to the forbidden lake in the jungle with my friends to go “swimming,” which really meant climbing trees, collecting mango’s and running around because none of us could swim and there were alligators in the lake. I even miss collecting wood for the “candero,” an outdoor stove, which at the time I did not like doing because it was a chore. I miss the nights when the neighborhood would gather around a tree and we would all sing and tell stories. 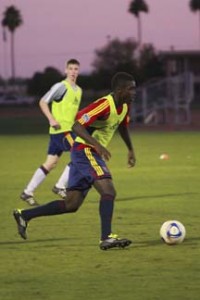 In Guinea Bissau, soccer was our only form of recreation. My friends and I would make soccer balls by stuffing paper and trash in plastic bags and then wrapping plastic bags tight around the ball of trash. We would play with the best ball first, and then when that one was destroyed we would move to the second best ball. Once in California, my step-dad put me on a recreational team, but the coach quickly moved me to a better club. From there, I moved from club to club until a soccer coach recommended me for a tryout with Real Salt Lake – Arizona soccer academy at Grande Sports Academy. The academy is the residential youth academy of Real Salt Lake, a professional team in Major League Soccer. When I found out I made the team there was no question in my mind that I wanted to move to Arizona.  I had to sacrifice a lot by leaving my mom, siblings, and friends. However, I was presented with an incredible opportunity to achieve my dream of becoming a professional soccer player.

After high school, I want to go to college to get a degree, and then hopefully play professionally in Major League Soccer. After moving from Africa to the United States, I learned that I have incredible opportunities here in America, both athletically and academically. With my hard work ethic, perseverance, and supportive people guiding me along the way, there is nothing that I cannot accomplish.