2013 hasn’t been as kind to RSL-AZ U16 who now find themselves in a battle with Real So Cal and Chivas USA for the top two spots in the Southwest Division. With two games in hand RSL needed a strong showing in both games to keep pace with the two opposing clubs. 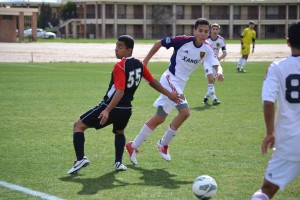 Summary: Going into the game RSL knew they were going to have their work cut out for them this weekend against the #2 and #3 placed teams in the Northwest Division.

RSL came out of the gates strong versus Crossfire Premier but were unlucky on the attacking end. Numerous chances for RSL were not capitalized on in the early stages. Crossfire took the pressure and were able to counter in the 31st minute when a ball was played over the top. A Crossfire Premier player picked up the ball and beat the RSL GK. Few chances for either team as the first half ended.

RSL kept the pressure in the second half but were still not converting their chances in the final third. Players also seemed to get distracted by what they thought were some favorable calls for Crossfire Premier. RSL kept pushing forward and as the clock was ticking down a Crossfire handball in the box was not called. RSL players screamed for a PK as the center ref had a clear look at the incident. The ref ignored it and let play resume. RSL tried to equalize but time expired resulting in a 1-0 Crossfire Premier victory. 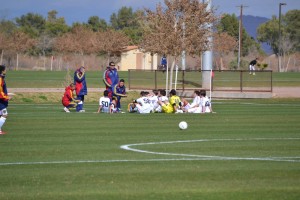 Summary: After suffering a 1-0 defeat the day before, RSL needed a strong showing to be able to return back to Grande Sports Academy with some points.

Just two minutes into the game Seattle had the first chance for either side when a screamer went just over the RSL crossbar. Seattle kept up the pressure and was able to take the lead in the 14th minute when an errant back pass by RSL was picked up by a Sounders FW who calmly finished.

Sounders kept the pressure up and pounded the RSL goal. If it wasn’t for the excellent play from GK Luis Barraza Seattle could have easily scored more. Seattle went into the half with the 1-0 lead.

Things didn’t get any better for RSL who had to battle a tough and physical Sounders team while playing with a heavy rainfall. Sounders doubled their lead in the 14 minutes into the second half. RSl tried to push forward but their efforts didn’t pay off as they lost 2-0.

RSL is now in third place in the Southwest Division.