Real Salt Lake Academy teams hosted Real So Cal on Sunday at Grande Sports Complex. Below are the recaps and pictures from the games. 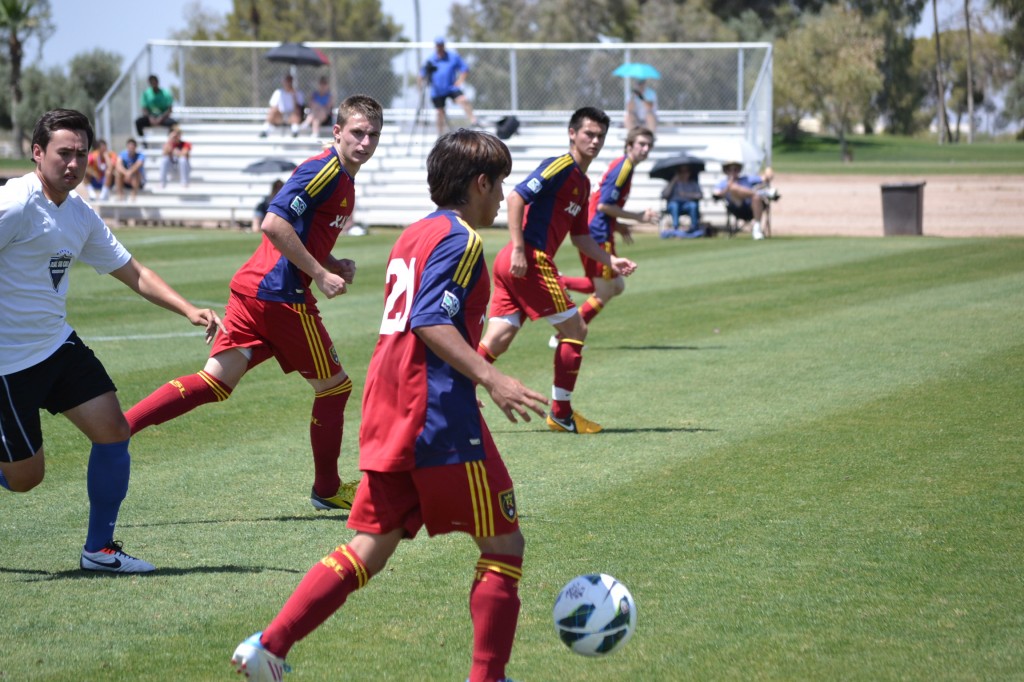 The last time these two teams faced each other six weeks ago, Rea Salt Lakes’s inability to finish chances allowed Real So Cal hang around long enough to grab a victory late. On Sunday, RSL made sure this wasn’t the case again.

After initial opening minute shots from Jose Hernandez and Andrew Brody that threatened the So Cal net, RSL was able to convert one when Hernandez, on the end line, passed to the top of the box. Trevor Hyman came running in and pounded a shot low right. Off the ball movement by Amer Sasivarevic created a major hole for Hernandez to run into to after receiving the ball from Andrew Brody.

Four minutes later Coco Navarro played a through ball to Sasivarevic who showed great composure when finishing the shot with the So Cal GK coming out.

RSL’s defense was also having a stellar day. CB Santi Carrillo was aggressive throughout the whole game winning countless 50-50 chances and coming up big in the 26th minute when Real So Cal countered 3v2. Carrillo took a step back and perfectly timed the tackle ending the So Cal threat. RSL scored their third goal in the 35th minute when Navarro took a shot that was saved by the So Cal GK. The ball bounced right and Brody picked it up and finished.

With the lead firmly in hand, RSL’s second half was a lot quieter with few chances for both sides. Jon Zabasajja stopped a few So Cal chances, Gk Luis Barraza made a few saves and Kostas Kotselas had a few chances but the shots were off the mark. Tigran Tiraturyan had the final chance with minutes remaining by a finger tip save by the So Cal GK kept the game at a 4-0 RSL victory.

The shutout is RSL’s first in the last three matches. RSL now has a 4 point lead in the Southwest Division. Te Wihongi, from New Zealand, was subbed into the game in the 80th minute making his Academy debut.

With only three points in their last three games RSL needed a victory over Real So Cal to keep pace in the Southwest Division with the leaders.

After a slow start for both teams things started to get very active at the 18th minute. Real So Cal had their first shot on goal when their counter attack was foiled by RSL’s ability to get numbers behind the ball. The weak shot didn’t threaten Chase Bishov who then quickly bounced up and threw a ball forward that led to a RSL counter. Bofo Saucedo then beat the So Cal GK and took a shot that traveled across the face of goal hitting the post and bouncing out.

Saucedo became constant threat on So Cal’s defense after this. He has another shot in the 23rd minute saved and looked as if he was taken down in the box in the 29th minute which was not called. Saucedo continued to work hard and grabbed the goal he had been searching for in the 37th minute. The assist goes to Jason Eng who was helped by Evan Waldrep who had been a force over the last 15 minutes in the midfield. CB’s Justen Glad and Dillion Nino also had a tremendous day holding down the backline.

After the restart in the second half RSL didn’t miss a beat as they continued to create chances. Brooks Lennon had the best opportunity when he cut into the box got tripped up and took a shot. It looked as it Lennon was going to fall but coaches praised him for his strength and toughness by staying up.

As time was close to expiring So Cal push forward for the equalizing goal but they were deterred by RSL’s strong defensive showing.

With the victory Real Salt Lake is now 2 points behind Real So Cal for second place in the Southwest Division.

Real Salt Lake U16 Academy had a huge victory this weekend when they defeated Real So Cal, 1-0, at Grande Sports Complex. With the three points, RSL has closed the gap between them and the two leaders, Real So Cal and Chivas USA, in the Southwest Division.