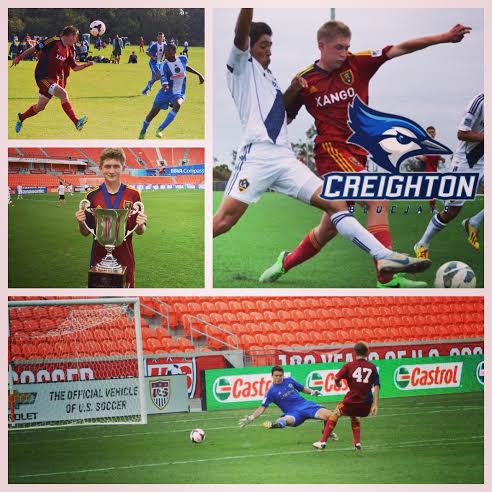 Waldrep is set to become the first player from the GSA to play for the historic Creighton Blue Jays men’s soccer program, which have advanced to the NCAA Tournament in 18 out of past 19 seasons and have had over 20 players turn professionally since 1996.

“That was a big factor,” Waldrep said. “I want to play professional soccer and when I looked at Creighton’s record over the past 15 years and how they performed in the NCAA Tournament it showed they had consistency. During those years they performed well and made it far in the tournament.”

Waldrep is currently in the midst of his second season at the GSA in which he has started in all 12 matches played. Last year Waldrep joined the RSL-AZ U-16 Academy team in January 2013, and was featured in sixteen matches. During the U-16s run to the U.S. Soccer Development Academy Finals Championship, Waldrep was featured in six out of seven postseason matches, and in the title match win over Solar Chelsea on July 20th, 2013, Waldrep scored RSL’s fourth goal when he broke through the Solar defense and calmly slotted the ball past the diving goalkeeper.

Academically, Waldrep currently holds a 4.6 GPA, and finding a school that plays a similar style to the RSL-AZ Academy as well as providing a good academic program was a must.

“First I looked at their soccer team and during the college process I looked at which teams play like the RSL Academy and Creighton was one of them. I was also looking at academics and Creighton has a really good academic program.”

There is a connection between Creighton and the RSL-AZ Academy, as assistant coach Mike Kraus played for the Blue Jays between 2003-06, and before Waldrep set foot on the campus he spoke to Kraus about the school.

“Before I went on my visit, I told him I was going to Creighton. I asked him how he liked it and how the soccer program was. He said it was a nice campus and that the program was top notch.”

When Waldrep traveled to Creighton he experienced how cold the temperature may drop in the state of Nebraska in the winter months. Waldrep an Arizona native is already looking forward to the cold weather.

“I’ve always loved cold weather whenever my club team traveled to colder states. It might take a little to get used to, but I’ll get used to it.”