With Dallas Cup and spring break now over, things at the Academy are starting to return back to normal. Our players have been working hard this week as a Seattle trip is planned for the Academy teams, U16 & U18 and a Tucson trip, Far West Regional, is scheduled for our U16 Elite team. Below are some pictures from this week’s action. Click on one picture and a slider gallery will appear.

RSL-AZ players have been working hard this week during their spring break. Below are some pictures from this week’s training. They also played a cross and finish game and if you missed the hilarious video make sure to watch it below.

Here at the Grande Sports Academy we have noticed a lack of GK presence on the site. Well we are going to change that right now. 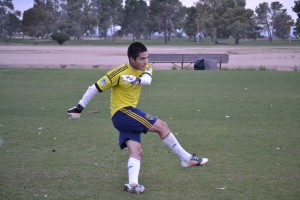 On the elite side our GK’s have helped the U16’s win the Desert Classic and advance to the quarterfinals in the Presidents’ Day Cup.  On the Elite U18 side the GK’s helped the team by going 3-1 in tournament play.

Goalkeeper coach Ignacio Hernandez talks about what they have been working on over the past few months saying, “The guys have been working hard. From the beginning I have been emphasizing 4 different points of improvement. Communication skills, foot skills, how to play out of the back and balls in the air. They have performed well in all of these.”

Congratulations goalkeepers for all the great and hard work.

On Thursday, September 6, the US Under-15 BNT played two scrimmages in Carson, CA against Arsenal FC U16 and LA Galaxy U16 soccer teams. The boys all played an influential role in the 4-0 win against Arsenal FC U16, a Southern California Development Academy team. Christian Herrera (GK) played well in the first half and kept his net untouched. In the second half, substitute goalkeeper Justin Vom Steeg had a quiet evening as the U.S. held Arsenal to zero shots on goal. The U15 BNT ends camp with an intrasquad scrimmage on September 7 with the boys returning to Grande Sports Academy the next day in joining the team for a well deserved free weekend.

Starting Lineup for the US Under-15 Boys National Soccer Team: