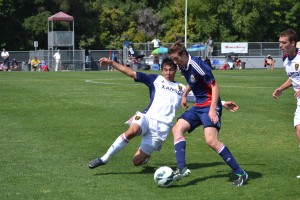 Real Salt Lake Academy teams traveled to Los Angeles this past weekend for some big games vs Chivas USA & LA Galaxy. Below are the recaps and pictures from the games.

With Southwest Division title hopes on the line, Real Salt Lake knew this weekend was to be tough. With a game on Sunday against LA Galaxy, 2nd in Division, RSL knew a victory over Chivas USA on Saturday would put them in the drivers seat.

Both teams wasted no time challenging the ‘keepers early. In the 5th minute a Chivas USA player, unmarked in the box, fired a shot near post that was saved by a diving Luis Barraza with his fingertips. Minutes later it was RSL’s chance to challenge the Chivas GK. Jose Hernandez weaved through a few defenders and laid a ball off to Coco Navarro. He took a touch and shot high. The GK got a hand on it and punched it out. Chances for RSL were limited after this to shots off target that had no real chance.

In the 24th minute Chivas USA took the lead when RSL’s defense make a uncharacteristic bad pass up the middle. A Chivas USA player intercepted the ball dribbled to the 18 and fired far post giving them the lead going into the half.

Chivas held on to this lead until the 66th minute when Jose Hernandez scored. His original shot inside the box was saved and he collected the rebound and shot over the GK.

The joy was short lived as Chivas USA scored again in the 73rd minute and the 75th minute. Both goals coming from defensive miscommunications.

RSL mounted a comeback late that started with Coco Navarro in the 87th minute. His shot outside of the 18 curled to the right side hitting the post and bouncing out. In the 90th minute Andrew Brody forced a turnover on the wing and then passed to Benji Lopez. He took a shot from the wing and it was so powerful when it hit the ‘keepers hands it went into the net.

The comeback was abruptly cut after the goal seconds later when the whistle was blown ending the game with a Chivsa USA, 3-2, victory.

Notes – After making his Academy debut last week, Te Wihongi made his first starting XI. Benji Lopez made his first appearance for RSL in over 4 months (last game 12/15/2012). 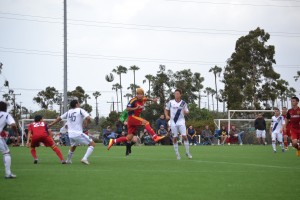 RSL U18 vs LA Galaxy

The loss against Chivas USA and a Galaxy win on the same day cut Real Salt Lake’s lead in the Southwest Division to 1 point.

In similar fashion to the game the day before both teams came out strong creating numerous chances. RSL had the better of the chances, the first coming in the 3rd minute when Amer Sasivarevic shot just wide. Andrew Brody had two, the first in the 4th minute when he fired over the crossbar from distance and the next in the 12th minute when he cut into the Galaxy box firing a shot too high that hit the crossbar and bounced out.

Luis Barraza, RSL GK, was active early on smothering a Galaxy threat in the 10th minute a making a huge diving save in the 14th minute. Then followed it up with punching out a corner kick moments later.

The game then slowed down after this for both sides with no shots on goal as both teams had stellar defensive performances. Santi Carrillo and Andrew Brody made big stops jumping in front of Galaxy crosses.

RSL’s best chance in the game came after the half in the 47th minute when Amer Sasivarevic fought for the ball in the box and fired a point blank shot. Galaxy’s GK was in a great position as he threw his body in front of the shot, coming up with the ball.

A controversial moment in the game came seven minutes later when the Galaxy took the lead on a quick restart. A Galaxy player was fouled in the RSL half. The ball, looked like it was still rolling, was played up to a Galaxy FW who chipped it over a diving Luis Barraza.

RSL players looked around and were confused by the no call while the Galaxy players celebrated. RSL pushed for the equalizer for the next 30 minutes but were unable to get a real threat on the net.

The game ended with the Galaxy win giving them first place in the Southwest Division dropping RSL down to second.