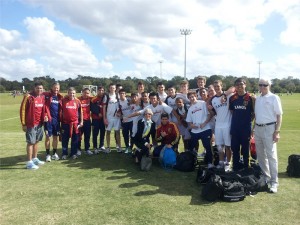 Day two of the 2012 USSDA Winter Showcase in Lakewood Ranch, FL was tremendous for the RSL-AZ Soccer Academy U18 and U16 teams. Both teams started the first day of December with wins to remain undefeated in the tournament.

The first match of the day saw the RSL-AZ U18’s in their second game of the tournament against a well disciplined Crew Soccer Academy Wolves. The RSL-AZ coaches made changes to the starting eleven. Players like Brandon Marquez, Jose Vasquez and Kostas Kostelas received their first starts of the season.

The play was very lively and hard fought through-out the first half. Both teams pushed the ball mostly between the two penalty boxes and struggled to create any real scoring opportunities. The closest to scoring occurred when the Crew’s best player, Sam Brown, sent a shot that went inches wide of the left post in the 27th minute.

In the second half, RSL-AZ displayed more of their signature fast paced possession play. Connecting strings of passes in the attacking half of the field and pressured the opposing team much higher up their end of the field. As the game proceeded, it was a style of play that began to cause more and more problems for the Crew’s defense.

In the 56th minute Andrew Brody found himself in a good scoring opportunity but his shot was saved by the Crew goalkeeper. Trevor Hyman’s follow up shot off the goalkeeper’s save sailed wide of the goal for another missed chance. 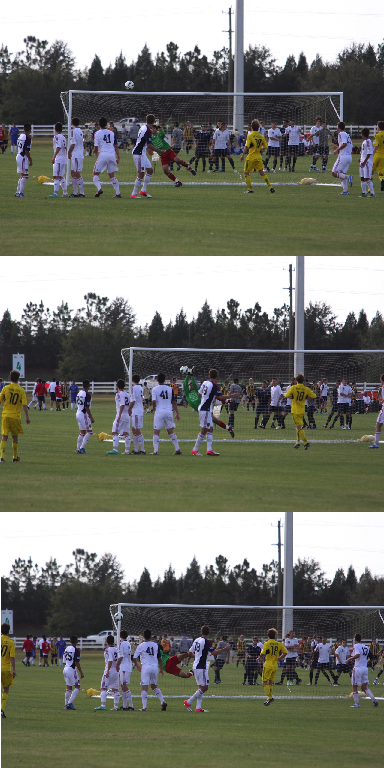 In the 68th minute RSL-AZ broke the deadlock when Jose Hernandez, who has shined in the tournament so far, skillfully made another great run on the right side of the pitch and found Kostelas who was open for a chance. Without hesitation, Kostelas fired off a low shot and nicely placed the ball into the bottom right-hand corner of the goal for a RSL-AZ 1-0 lead.

Ten minutes later another chance was missed when RSL-AZ’s Trevor Hyman saw his cross go over the crossbar from Kostelas header. After this, the RSL-AZ’s coaching staff brought in some fresh legs with several substitutions in the last 10 minutes in hope of putting the match out of the Crew’s reach.

In the final seconds of the game, the referee awarded the Crew with a free kick just outside of RSL-AZ’s penalty box. The Crew’s number 10 sent a powerful and precise curved ball over the RSL-AZ wall, but Luis Barraza came flying across the goal for a terrific save and secured a 1-0 win for RSL-AZ U18 Soccer Academy.

The RSL-AZ U16 Soccer Academy team’s afternoon game was against Montreal Impact Academy. RSL-AZ’s first game of the tournament provided an exciting 80 minutes of soccer.

The first 20 minutes of the game started off slow with RSL-AZ enjoying more of the possession, but neither team was able to create any clear cut scoring chances. After half an hour of play Montreal Impact scored a go-ahead goal off a fast break. The Montreal goal caught the attention of the RSL-AZ players which began to open up the game and it turned into a phenomenal goal-fest. Only six minutes after falling behind to Montreal, RSL-AZ’s Moises Rodriguez found the equalizer to set the half time score at 1-1.

The RSL-AZ team came out with their guns blazing in the second half. RSL-AZ scored two goals in the first four minutes of the half to take a commanding 3-1 lead over Montreal. The first goal was created when Rodriguez found Josh Doughty cutting inside the penalty box in the 42nd minute. Doughty blasted a shot from close range that sent the goal net on fire and provide RSL-AZ its first lead of the match. Two minutes later Doughty connected with Damin German on a  a deep pass. German’s speed overtook the Montreal defenders and doubled RSL-AZ’s lead. 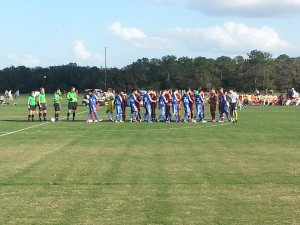 The Montreal players refused to give up and started playing better after falling behind RSL-AZ’s two goal cushion. Six minutes later they pulled back within one goal deficit after a strong run on the left hand side by Montreal’s David Choiniere as he scored his second goal of the game.

The next fifteen minutes of play saw a hard fought battle for every ball as RSL-AZ tried to restore the two goal lead and Montreal Impact was trying to find the equalizer. After exactly an hour of play Montreal found their equalizer through Pierre Lamothe and with twenty minutes left to play, the teams were once again all squared at 3-3.

RSL-AZ players stepped on the gas pedal and dominated the last quarter of the game. As time was winding down and it seemed like the game will end in a tie, RSL-AZ made a great combination in the middle of the field. Doughty found sub Terrel Lowe in the penalty box where a Montreal defender tripped him. The referee awarded RSL-AZ with a last minute penalty shot. Doughty stepped up and put his team up one, 4-3.

The referee added 3 minutes of stoppage time and that was all RSL-AZ needed to find their fifth and final goal of the game. After making a great run Lowe passed the ball to German who chipped the ball over the defenders foot and hit the left bottom corner of the goal. An amazing goal to wrap up a great second half performance. The RSL-AZ U16’s remained unbeaten this season despite missing three starters due to a Showcase All-star game: Justen Glad, Sebastian Saucedo and Brooks Lennon.

Grande Sports Academy, Casa Grande, AZ –  This past weekend Real Salt Lake – Arizona U18 and U16 Soccer Academy teams headed out to sunny San Diego to play double headers against local San Diego Surf and Nomads SC teams. It was a fantastic battle as the  RSL-AZ teams played some high quality matches throughout Saturday and Sunday and took a huge 10 out of a possible 12 points back home to Grande Sports Academy with 3 well deserved wins and a draw to extend their unbeaten streak to 5 games.

Both teams were off to a successful start on Saturday, winning 2-0 and 4-1 against their first opponent, the San Diego Surf.  On Sunday the RSL-AZ U18 team had another shutout win as they defeated the Nomads SC with a score of 3-0. The younger U16 RSL-AZ Academy team was the superior team against their opposition as well, enjoying majority of the possession and creating more chances, but had to settle for a 1-1 draw.

With these great results both Grande Sports Academy teams solidified their positions at the top of the Southwest Division in the  Western Conference of U.S. Soccer Development Academy.

There is no time to rest though as both teams get to defend their top position this upcoming weekend at Grande Sports World in Casa Grande, Arizona.  The RSL-AZ Academy teams will face another Major League Soccer Academy, the newcomers  – Portland Timbers this upcoming Saturday, October 20 at 10am and 12:30pm respectively.

In the first game of the weekend RSL-AZ U18s faced the local San Diego Surf. RSL-AZ came out strong and established their fast paced passing style of play right from the start. They passed the ball around with confidence and it paid off early in the game as Jose “Coco” Navarro sliced through the Surf defense before finding Benji Lopez flashing in on goal. Lopez took his opportunity well slotting the ball under the advancing goalkeeper to give RSL-AZ a 1-0 lead in the 17th minute. In the second half Navarro, who just recently committed to Marquette, again led the attack this time feeding Jose Hernandez a nice through ball. Hernandez still had some work to do as he rounded the goalkeeper and tapped the ball into the back of the net for the final score (2-0) of the game. RSL-AZ’s goalkeeper Luis Barraza orchestrated his defense very well as they got the shutout win.

On a sunny Sunday afternoon the RSL-AZ academy came up against a resolute Nomads team that were determined to stop the Arizonians attack, but Benji Lopez and Riggs Lennon had other ideas as they combined for three goals and another RSL-AZ shutout win.

17 minutes into the first half Jose Hernandez waltzed through the Nomads midfield before brilliantly finding Lennon sprinting in from the left wing. With the goal at his mercy the big lefty made no mistake in finding the net for a 1-0 lead.

Only 5 minutes later RSL-AZ was two goals up. Isaias Juarez burst forward down the right hand side from his defensive position, finding the feet of Lopez who left the Nomads’ defender spinning in the wind with a wonderful move and fired a rocket that the goalkeeper could only helplessly watch hit the back of the net.

In the closing stages of the match Lopez was brought down in the box by Nomads’ defender. Lopez stepped up to take the penalty kick himself and score his second goal of the game and third goal of the weekend. RSL-AZ goalkeeper Barraza recorded his second shutout win in two games as his team finished with a 3-0 win.

The RSL-AZ U16’s came out of the gate fast and furious and never looked back as the San Diego Surf had no answers to RSL-AZ’s fast paced attacking style of play, especially in the first half. It took 17 minutes for the Grande Sports Academy boys to break the dead lock. Brooks Lennon, who already had several dangerous forays down the left flank found Moises Rodriguez with a nice cross that Rodriguez pulled down with a deft touch before hammering a left footed shot beyond the Surf goalkeeper.  Rodriguez needed only 10 minutes to get on the score sheet for the second time in the game. Damian German set up the goal with some crafty footwork, beating a couple of defenders before sliding the ball to Rodriguez, who had an easy tap in.

Within a minute, the Surf punished RSL-AZ for some slack play in the midfield as they stole the ball and pulled one back. The goal only slowed RSL-AZ down for a moment as they responded quickly with a goal in the 34th minute. After flashing down the left wing yet again, Lennon crossed to Rodriguez, who flicked the ball goal ward and German made sure the ball crossed the line heading in from point blank range. RSL-AZ continued to keep the possession effectively in the second half closing the game with a Surf own goal as Elias Rieland hit a hard crossing ball that the Surf defender turned into his own net for a final 4-1 win.

The final game of the weekend saw the RSL-AZ U16s finding the going tough against a Nomads team that played all 11 players behind the ball for most of the game. For the third time this past weekend, it took 17 minutes for RSL-AZ to take a well-deserved lead through Diego Silva’s well taken header off of a quality cross from Moises Rodriguez. Although RSL-AZ dominated possession throughout the game they could not get the second goal and in the 65th minute Gerardo Camerena hit a long strike that eluded RSL-AZ goalkeeper Chase Bishov tying the game and setting the final score at 1-1.