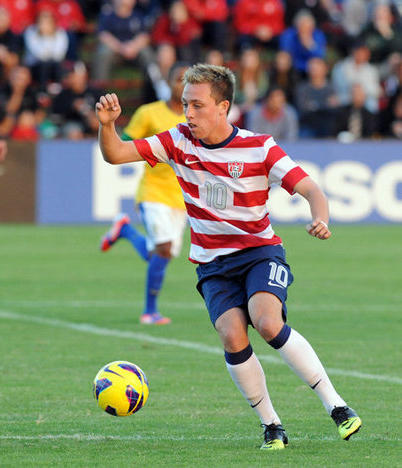 CASA GRANDE, Ariz. – Real Salt Lake Academy midfielder Corey Baird and the U-18 MNT went undefeated at the 2013 Limonges Tournament, which gave Baird and his teammates a second place finish at the three-match tournament.

In the opening match against host country France, the U-18 MNT came back from a two-goal deficit and scored the late equalizer in the 79th-minute. Baird came off the bench in the 76th-minute and played as an outside midfielder. Highlights from the match can be seen here.

In the second match against the Czech Republic, Baird was subbed in at the 61st-minute and helped the U-18 MNT hold onto a 1-0 win. Highlights here. In the final match against Poland, the U-18s scored a goal and were on the fortunate end of a Poland own goal in a 2-0 win. Baird was subbed on at the 60th-minute and played as an attacking midfielder. Highlights can be watch here.

Even though the U-18 MNT went undefeated in three-matches, they lost out on first place due to goal differential. France, who were the winners, defeated Poland and Czech Republic.

Baird spoke highly about the trip and was extremely pleased with the U-18s performance as a team.

“We showed that we can compete with the best teams in the world and we only lost out on first place due to goal differential. Coach Perez was happy. For him it was like we won the tournament.”

Even though Baird did not see as many minutes as he usually does, he said the coaches were pleased with what he did in the minutes he was given.

Next up for the U-18 MNT may be another tournament in Europe later this year.