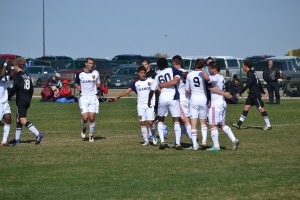 Real Salt Lake U18 Academy had a big weekend coming up vs Crossfire Premier and Seattle Sounders FC in Washington. Below are the recaps from each game.

Summary: Going into the first of two big road games, RSL knew they were going to need a good start immediately. However due to weather conditions and a smaller field it took RSL about 20 minutes to find a rhythm in the game. And once they found it the game was essentially over.

Kostas Kotselas, thrust into the starting lineup for the missing Coco Navarro, scored once in the 27th minute and again in the 37th minute. Crossfire Premier kept the game tight with aggressive play and hard work which kept the game close until the 84th minute when Amer Sasivarevic scored his first foal of the season. Crossfire Premier were able to grab a goal back in the 90th minute off of a free kick ending the game with a 3-1 RSL victory.

Even with the victory RSL knew they could play better because a big matchup was looming vs Seattle Sounders the next day.

Summary: RSL found themselves under pressure early on in the game. The Sounders were a far more aggressive, technical and hard-working team versus RSL opponent on Saturday. Minutes into the match Sounders had their first chance when a player was taken down in the box. The resulting PK was denied by the post, keeping the game scoreless. Around the 22nd minute Seattle found the back of the net and then 15 minutes later they doubled their lead when a cross came in and a Sounders player fired a low shot.

RSL players went into the half with their heads down and upset over some poor calls they thought the ref made. Coaches however told the players to keep their heads up and to get ready for another 45 minutes.

RSL dodged a bullet in the 56th minute when two shots by Sounders on a corner hit the crossbar. Minutes later RSL scored when Tigran Tiraturyan took a shot. RSL then equalized minutes later when second half substitute Amer Sasivarevic scored his second goal of the weekend.

The inclusion of Amer Sasivareic and Coco Navarro at the start of the second half was huge for RSL. Navarro, recovering from playing in the RSL reserve game on Saturday, provided the assist on both goals.

Both teams had a few more chances after this but nothing too threatening. RSL tied Sounders, 2-2 giving them 4 points on the weekend.