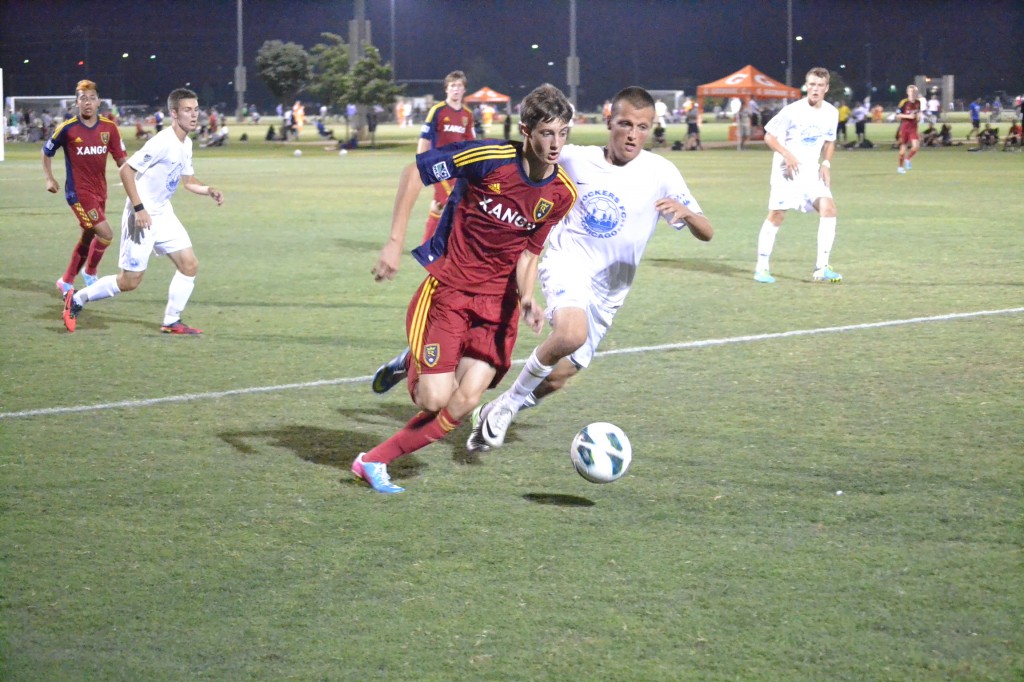 Fisco, TX (June 26th, 2013) – Real Salt Lake picked up a valuable point in a scoreless draw against the Chicago Strikers on Wednesday night in the second game of the group stage in the U.S. Soccer Development Academy Playoffs.

RSL now has 4 points in group play and have an opportunity to win the group and advance to finals week when they face FC Dallas on Friday morning. RSL needs to outright win this game and FC Dallas just need a draw.

RSL came out strong in the opening minutes, sending in a flurry of shots in the 10th minute that were all deflected out by the Sockers defense. Brooks Lennon, unmarked, had the best opportunity for RSL in the entire game when his header, inside the box, went just wide.

RSL continued to push forward but were unable to find the break. Diego Silva was once again deadly on the wing with his runs and crosses but when balls came into the box, no players were making runs.

The Sockers performance started to improve near the end of the half and threatened the RSL goal on a few chances late. ‘Keeper Chase Bishov had some big saves the first in the 35th minute when he positioned himself to stop a shot on the wing and another in the 37th when a Sockers, unmarked, headed in a shot from 3 yards out. Bishov raced out and pushed the ball aside preserving the shutout as the teams went into the half.

After the break, RSL came out strong again and a 48th minute shot by Josh Doughty from the left-wing hit the post and bounced out. Two minutes later, a high cross by Diego Silva was sent into the box. Bofo Saucedo raced in and headed ball far post but a well-timed saved by the Sockers ‘keeper kept the game scoreless.

RSL’s defense then started to step up and if it wasn’t for the performance of CB Justen Glad, Sockers could have easily had a goal. In the game, Glad stopped 4 counters and became so deadly that Sockers players started to play around him to avoid him.

A 63rd minute sub brought Dillon Nino which moved Luis Lopez to the midfield. This proved to be a key substitution as Lopez became a massive threat and helped control the middle. This allowed Jack Gayton to move up more in the attack and a spin move by him outside of the 18 gave him a great open look but his shot was saved in the 72nd minute.

Gayton had another shot on goal 3 minutes later which went out for a corner. RSL then had 4 corners in a row and each time then ball was played in a perfect spot but no one could find the back of the net.

Sockers, who needed a win to stay alive in group play, then started pushing forwards but big time defending by RSL’s backline and some more timely saves by Bishov kept the game scoreless.

Next game for RSL will be on Friday at 11:00am vs FC Dallas