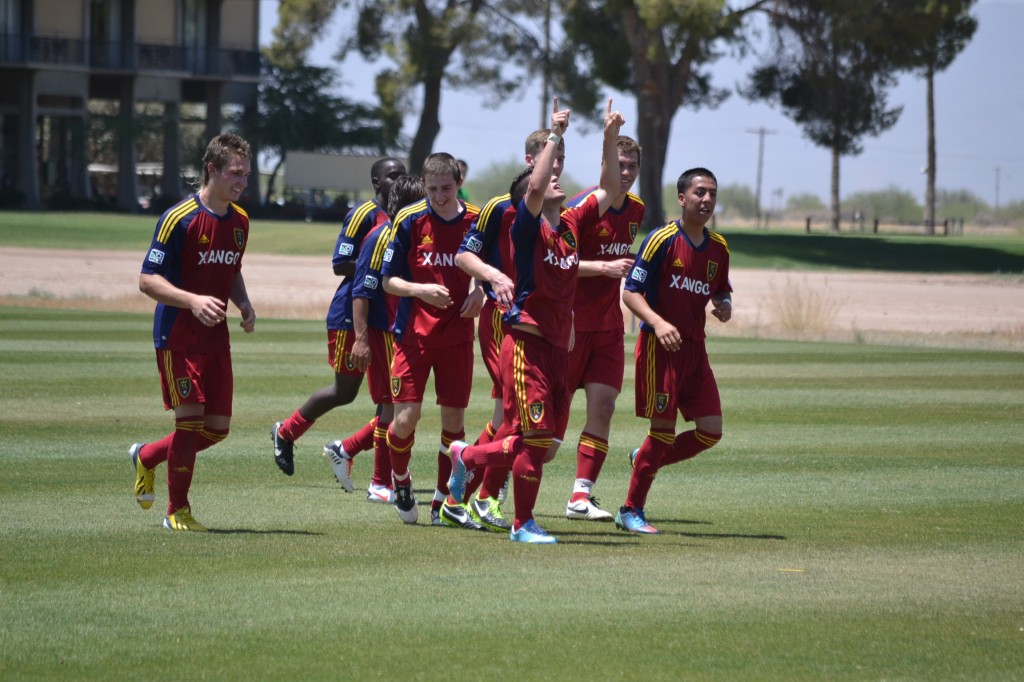 The clock is ticking. With seven days remaining before the Grande Sports Academy home of Real Salt Lake Academy teams embark on a 20-hour drive to Dallas for the U.S. Soccer Development Academy Playoffs, the coaches are loading up the schedule with extra training sessions combined with multiple friendlies to prepare the U16  & U18 teams for the grueling one-week tournament.

“The idea is to create an atmosphere that resembles what the tournament will be like,” assistant coach Freddy Juarez said. “The two-a-days are to get the boys fitness back up after the week break we gave them and the games are supposed to resemble what the tournament is like. Three games in a short amount of time with little recovery.”

Training sessions at the crack of dawn followed by rest and recovery and then another session at night has been the norm for the past five days. To further prepare the players, the coaches scheduled three games in five days to simulate what the playoff schedule is like.

On the outside looking in the schedule may look tough but players at the academy understand the importance of it.

“We had a week break and a lot of us came back a big out of shape so 2-a-days are a quicker way to get back into shape,” said senior Tigran Tiraturyan. “The playoffs are not going to be easy and we want to push ourselves so we can be the best.”

Over thirty-two teams qualify for the playoffs with the draw scheduled to take place on June 17th. The teams will be divided up into eight groups with four teams per group playing in a round-robin format. The team that finishes first in the group will advance to the finals, held two weeks later, and the other three teams will be eliminated.

As in the case of every tournament the academy participates in one bad loss can crush a teams chances of advancement to the next round.

Coaches are hoping the 2-a-days combined with the games will give the RSL academy a leg up heading into the tournament. RSL academy teams will also be one of the most experienced sides at the tournament. The U18 & U16 teams have both qualified for the playoffs the past three years. Key members of the U18 academy team were on the U16 team that finished in 3rd place in the finals during the 2010-2011 season.

“We want our players to work for it,” Juarez said. “The tournament isn’t going to be easy and neither are these training schedules and games. The hope is that our players can come out of these sessions stronger players who are ready to take on the teams in the playoffs.”

Both academy teams are coming off an extraordinary successful season that saw numerous academy records fall. There is no perfect formula in sports but coaches are hoping that the schedule they laid out for the players will be the key to the team’s success.