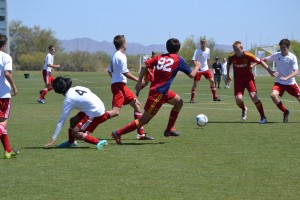 With two Arizona State Cup games in two days, RSL U16 Elite knew that they needed a strong weekend. On Saturday, RSL defeated Valparaiso, 3-1, and on Sunday RSL lost to CCV Stars 97 Black. Below are the recaps from the games

Sometimes in a game you need something to wake you up. For RSL, that was Valparaiso taking the lead in the second half. After the goal, RSL scored 3 goals and cruised to a victory in the opening game of the Arizona State Cup.

RSL was outstanding in the first half keeping the ball and possession on Valparaiso’s side. Unfortunately for RSL they just couldn’t finish. Shots by Duncan Storey and Tevin Lowe both hit the post and bounced out. Jonathan Min and Patricio Cevallos also had shots saved. RSL came out strong in the second half controlling the game even further in Valparaiso’s half. It looked like a 5v3 hockey power play. However as it seems to be the case with the U16’s, the defense got caught out of position when Valparaiso countered and scored.

Down a goal RSL pushed forward after the restart and earned a corner. Josh Coan’s cross found the head of Miles Stray who powerfully headed the ball into the net.

Seven minutes later RSL took the lead when Octavio Ocampo sent a free kick long into the box. Danny Moreno kicked the ball back into the middle of the box. Brandon Sands then pounced on the ball and fired into the back of the net.

The third and final goal came in the 76th minute when Duncan Storey dribbled into the box and shot bottom left.

RSL closed out the game with an important, 3-1, victory.

An important first game victory put RSL in a great position. With a potential victory over CCV Stars, RSL could secure advancement to the quarterfinals.

RSL started out strong again and almost took the lead within the first few minutes. Terrell Lowe had a header that just missed wide and Octavio Ocampo hit a volley that also went wide. With these missed chances and control of the possession the game started to feel like the opening game versus Valaparaiso. And in eerie fashion the opening goal happened in the same way when CCV Stars countered and scored up the middle in the 26th minute.

The start of the second half was a little unorganized for both teams and they kept kicking the ball around not producing any threats. RSL started to calm down and started to move around the ball with more efficiency around the 50th minute. The break came for them in the 56th minute when Nate Deaton headed down a ball to Terrell Lowe. He took a touch and played it through to Javi Avelar. He cut into the box took a touch and fired, equalizing the game at 1-1.

Both teams kept pushing for the winning goal as CCV Star who lost the opening game needed a victory to stay alive. RSL needed a victory to advance. CCV Stars outlasted RSL as they grabbed the lead in the 78th minute when they countered again. RSL did have a chance to take the lead a minute before when Nate Deaton fired a curling shot far post. The CCV Stars GK made a remarkable save with prompted the counter attack.

With minutes remaining RSL tried to find the equalizer but were unlucky as time ran out. RSL now faces off against Sereno who is 2-0. A victory secures advancement and a draw could help depending on tie breakers. Complete Standings here.