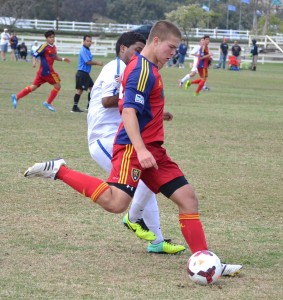 DEL MAR, Calif. – Real Salt Lake U-18 extended its match winning streak to three following their 4-1 win over Southwest Division rivals San Diego Surf on Saturday afternoon. The Claret-and-Cobalt was led by Damian German, who recorded a first half brace and Eric Carbajal, who scored a goal on either side of the half.

Playing in their first match in four weeks, RSL U-18 stormed out of the gate and forced the Surf defense to deploy 10-men behind the ball, which allowed the RSL U-18’s ample time to pick apart the stingy Surf defense. The first break for RSL occurred in the 16th-minute when Erik Holt cleared a Surf free kick from the corner. Corey Baird picked up the loose ball and played a through ball down the left-wing to a streaking Jose Hernandez, who then cut in and crossed to the back post where an unmarked German waited for an easy opening goal.

RSL continued to threaten the Surf goal and doubled their lead eight minutes later when Hernandez played to German on the left-wing. German looked up and crossed to Carbajal who lowered his head and scored with eight Surf defenders around him.

German added his second goal moments before halftime when Baird played a corner kick to the near post. German ran up and redirected the ball into the back of the net.

At the start of the second half, San Diego Surf attack overwhelmed the RSL defense and cut the deficit to two when a Surf player finished a cross. The goal was only the eighth goal allowed all season by the RSL U-18’s, who are now the only remaining U-18 team in USSDA league play to allow less than ten goals against to date.

RSL settled down after the goal and score their fourth goal on a short corner. Baird played to Hernandez who then passed to Gayton inside the box. Gayton dribbled to the touchline and sent in a low cross, which found Carbajal for his brace.

D.J. Villegas, Gui Leme and Leo Fuchs all made their USSDA debuts when they were subbed on in the closing minutes.