This past weekend Grande Sports World held the second annual open-invitational RSL Pro Combine in Casa Grande. Real Salt Lake’s technical team headed out to sunny Arizona to give around forty lucky hopefuls the chance to try out for Utah’s own professional soccer team.  The RSL coaching staff and General Manager Garth Lagerwey teamed up with RSL Academy head coach Martin Vasquez, as well as the rest of the Academy coaches, to overlook training sessions from the 8th-11th. 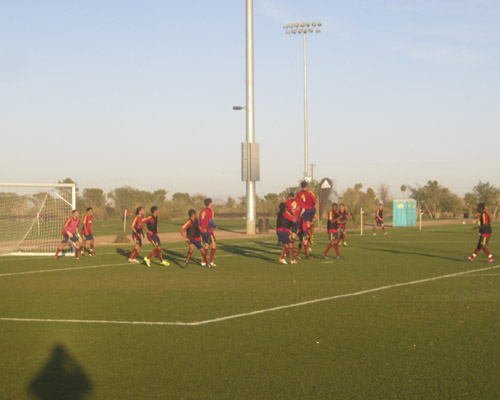 By holding these open tryouts, the coaches are hoping to identify skilled players that haven’t previously been recognized. Throughout the four days, they separated the stand out players from the rest to determine who could possibly be picked up in the 2012 MLS SuperDraft.

The try-outs consist of not only college players, but also, sixteen Academy players that were given the chance to make an impact in front of the RSL coaches. John Galas, Director of Goal Keeping at GSA and one of the scouting coaches for the Combine, expressed that we’re are looking for technically sound, physically strong competitors that want the ball and are comfortable on the field. “One of the perks of having the combine at Grande Sports Academies world class facilities is that everything we need is here. The coaches of Real Salt Lake are also able to maintain their relationships with the Academy members and can check up on their progress.”

After a series of three-minute scrimmages, I caught up with Nick Millington, a twenty-year-old college student from North Carolina. This was Nick’s first time trying out for a professional team and he made quite the trip to do so. “Coming out here to Casa Grande and fighting to differentiate myself from the other gifted players is very exciting, it is great exposure and I am working hard to make an impact,” stated Millington. Nerves and anxiety were clearly shared among all of the players battling for a chance to be a part of Real Salt Lake.

While speaking with RSL General Manager Garth Lagerwey, he explained that in the previous year’s tryouts, the Academy players didn’t stand out compared to the level of play exerted by the college players. This year however, there was a major turn around. “The level of talent coming from the Academy kids is outstanding, many of them are outshining the college athletes,” claimed Lagerwey, “We don’t get to see the players out here in Casa Grande enough, we want to give them the chance to compete against the older players in order for them to have more exposure.”

It was an exciting and busy weekend for Grande Sports World, and I wish the best of luck to everyone who participated in the chance to be a member of Real Salt Lake!