The U16 and U18 RSL Elite teams had impressive showings at the Presidents’ Day Cup hosted by SC del Sol over this past weekend. Even though both teams failed to win the championship for 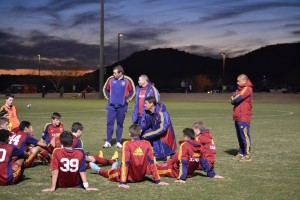 their age group the players and teams looked impressive throughout the tournament. Below are recaps for each team

Check out the U18 picture gallery from the tournament

Going into the tournament RSL knew their opening game was going to be tough. SC del Sol, one of the strongest teams in the tournament, defeated them 3-1, with two goals coming from set pieces. Based of the way the tournament is set up the loss to SC del Sol eliminated RSL from advancing to the next round. The team responded to this by winning their next three games and were so dominant in their final game against Colorado United the opposing teams Head Coach asked the referee to end the game ’18 minutes early.

Martin Vasquez – What do you take away from the tournament? “We were disappointed when we went to Surf Cup because we did not take the opportunity to do well in a very prestigious tournament. This tournament is very prestigious coming in and one of the goals was we need to show better because there are a lot of college coaches here along with good teams. Obviously we wanted to go to the final and the first game was against the best team in the tournament. A tie would have been great because that gives us an opportunity to advance but we lost and it essentially eliminated us. The approach we took after this game was make the best of it in the next three games. Three wins when they obviously were the best team, no doubt. Individually some of them had a great tournament and our forwards scored a lot of goals it was a big plus. We take away a big plus from this tournament and knowing the next tournament is even tougher Dallas Cup we know that we’re heading in the right progression that we are taking.

Eric Gonzalez – You’re thoughts on the tournament. “It was a little disappointing in the end for us but the tournament itself wasn’t too bad. We played a couple of decent teams and in the first game we were unlucky that we couldn’t get a better result. It cost us the tournament but the team put a good effort and were happy with that.”

Aiden Tucker – You scored 5 goals, how does this feel and what are your thoughts? “It feels good. We played well this whole tournament especially the last three games we played as a team. Together we kept possession and this is the way we played and we did a really good job and if we keep doing it in practice we can do it in Dallas Cup as well.”

Check out the U16 picture gallery from the tournament

RSL U16 Elite wanted to build on their previous tournament championship victory last week. In the first game the team losing came back from a Duncan Storey strike and a Miles Stary header. After this RSL cruised to victories in their next two games winning their group and securing a place in the quarterfinals. Playing against SC del Sol in the QF’s, RSL looked strong throughout the games. A finesse shot by Tevin Lowe just outside of the 18 with his left foot gave RSL a 1-0 lead. They held on for the rest of the match advancing to the semifinals. This matchup was against Colorado Rush. After a nail-biting first half controlled by Rush, RSL started to pick up the pace in the second half. Tired legs ultimately doomed them as Rush scored the game winning goal with 10 minutes left. RSL sent everything they had forward and a last second header by Tevin Lowe was blocked by the Rush GK.

Assistant Coach Michael Kraus – How do you some up the tournament and how has this team grown? “It was positive. It was physically exhausting playing 5 games in three days and it took a toll on them but mentally they battled last night. Today they battled for a good part of the game. when we still got behind we had the energy and mental toughness to push at the end and try to even it out. Over the last 6 months they have been getting better and playing much better soccer. The results weren’t there in the beginning but now they are playing good soccer and have combined the mental toughness and mental fortitude to go with it and now the results are coming.

Miles Stray – What is your take on the tournament? “It’s positive because in the beginning of the year we played a lot of these teams and didn’t do very well, tying or losing. We came back and it kinda summed up the fact that we have progressed over the 6 months that we have been here. It is about winning and we want to win. But the main point is to become better and get to that next level.

Miguel Martinez – Tough loss, how do you feel the team did? “We had really good games did what we could. We played our best after all but we were just tired and they were more mentally tough than us.”