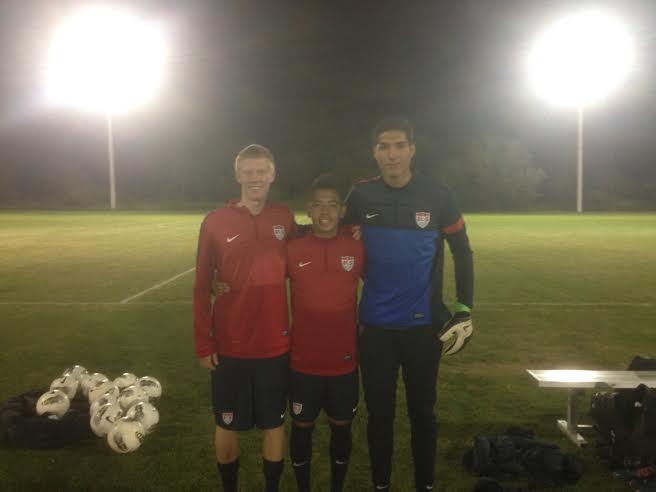 CASA GRANDE, Ariz. – Real Salt Lake Academy players came up big for the U-18 MNT in a 3-2 win over the U-17 MNT in Lakewood Ranch, Florida, at the conclusion of U.S. Soccer’s YNT January camp.

In picture from left to right: Glad, Saucedo, Herrera

RSL-AZ forward Sebastian Saucedo scored the third and final goal for the U-18 MNT in the 82nd-minute when he collected a diagonal ball down the left-wing. Saucedo took a touch to his right and dribbled through a U-17 MNT defender, which created time and space for Saucedo to pick his head up and place a shot past the diving U-17 goalkeeper into the right-side netting.

Saucedo’s goal proved to be a crucial one for the U-18 MNT as the U-17s came storming back and cut the deficit down to one in the 85th-minute. The U-17s on a corner, whipped in a cross that was poorly cleared to an unmarked U-17 player, who fired a shot from the 18. RSL-AZ goalkeeper Christian Herrera dove to his right and punched the ball out to the right-wing. An unmarked U-17 player ran up to the ball and dribbled to the touchline where he sent in a piercing cross that was deflected into the net for an own goal.

Just moments after the U-18 OG, Herrera made the save of the match when a U-17 player headed a ball on frame from a cross. Herrera was quick to react and deflected the ball over the crossbar to preserve the U-18 MNT win.

RSL-AZ defender Justen Glad played in the first half for the U-18 MNT.