Pictures from this game here 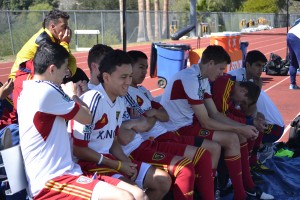 With first place in the Southwest Division on the line Real Salt Lake knew this was going to be a tough one against an opponent that hadn’t lost since November, 30th.

RSL came out strong in the first 25 minutes of the game. Passing the ball around well they created numerous chances in front of the net. The fist came in the 8th minute when Tony Murillo took a shot across the face of goal that was saved by the So Cal GK on the ground. Nine minutes later he took a shot through traffic that just sailed high. Jose Hernandez and Tigran Tiraturyan teamed up for what would be RSL’s best opportunity when a Tiraturyan cross found an unmarked Hernandez in the box. Hernandez then headed the ball at the goal and the So Cal goalie made a huge finger-tip save.

A few minutes later RSL was unfortunate they didn’t go down a goal when a So Cal counter attack was saved by Cesar Cobos. So Cal then countered again minutes later when a clearance from the back took a nasty bounce of the turf. The ball sailed over RSL’s defense and a So Cal player ran up took one touch and chipped Cobos for the goal.

After this RSL failed to gain composure and spent the rest of the half knocking the ball around. Things in the second half didn’t get any better as RSL couldn’t connect in the final third. RSL’s Cobos also kept the game close by making two big time saves in the 64th minute and again in the 77th minute.

So Cal crushed all dreams for a RSL comeback when they scored late twice. Once in the 89th minute and another in the 90th minute from a PK. It was an unfortunate loss to RSL who looked the better team in the game. But it all came down to quality chances and So Cal had more.

Quotes from the game:
Tony Bruce – What the 18’s need to work on – “The 18’s from box to box were very good. We just caught with the counter and it’s a lot different for us playing on turf. We train everyday on grass and here we play a small soccer field where you have to defend long throw-ins. We basically dominated the game but got caught on the counter. We just need to keep doing what we’re doing and get better in both box’s. We created a lot of chances but didn’t finish them.”

Tigran Tiraturyan – What the 18’s need to work on – “We just need to stat focused. We didn’t finish our chances and they countered and scored. We need to stay focused, execute our game plan and that is pretty much it”

Pictures of this game here 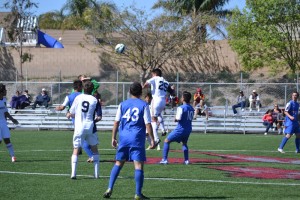 After losing to Real So Cal, which knocked RSL out of first place, the motivated U18’s looked to get back to their winning ways.

RSL wasted no time in showing Arsenal FC that the loss the day before was a rare occurrence. Five minutes into the game RSL jumped out to a 1-0 lead when Marquette signee Coco Navarro dribbled to the end line inside the box. He crossed to an unmarked Andrew Brody on the far post who calmly headed the ball into the net.

RSL spent the rest of the half inside Arsenal’s half leaving GK Cesar Cobos with little to do. A mixture of crosses, shots and counters threatened Arsenal’s goal but RSL couldn’t find a way to grab a second goal before the half ended.

As the second half resumed RSL continued to pound Arsenal’s half. Arsenal did have two chances in the half the first coming in the 51st mintue when a diving Luis Barraza saved a goal. And in the 55th minute a Arsenal FW had a 1v1 with Barraza and his shot ended up going wide left. After these two chances RSL calmed down and resumed their dominance in the game.

RSL grabbed a second goal when Andrew Brody crossed the ball into the box on the ground. Coco Navarro then fought for the ball and fired it into the net for his 18th on the season. RSL created another chance when Brandon Johnston crossed to a unmarked Navarro on top of the box. He let the ball touch the ground and his shot just went over the goal.

RSL then passed the ball around until time expired, giving them the 2-0 victory.

Quotes from the game:Andrew Brody – Talks about his goal – “I saw Coco dribbling on the end line. I knew that he was going to put it back post. I had only one thing on my mind, which was to put it near post. Fortunately it went in and it was good for the team and good for me to get on the score sheet.”

Jose “Bean” Vasquez – Biggest difference between yesterday and today “We were just able to put the ball into the back of the net. Yesterday we dominated probably even more but we couldn’t just finish. Today was just on and we scored on the two opportunities we got