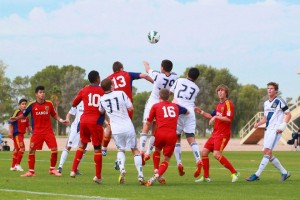 Grande Sports Academy, Casa Grande, Arizona – This past weekend the Real Salt Lake-AZ Academy teams hosted their biggest and fiercest Western Conference rivals, the LA Galaxy, at Grande Sports World in Casa Grande, Arizona. The playing conditions were perfect and with top spot in the Southwest Division at stake, players on both teams were fired up and ready for the “battle of giants”.

A great number of supporters of both teams gathered at the Grande Sports Academy fields and saw two high quality and fast paced games from two of the best soccer academies in the country. Nuances and luck definitely played a roll in the outcome of the games. The LA Galaxy U18 Academy team handed the Real Salt Lake-AZ U18 boys their first defeat of the season in a very exciting match with lots of great goals and some controversy as well, ending their eight game unbeaten streak with a last minute 3-2 win.

The RSL-AZ U16s were up 2-0 at half time but could not hold on to the lead and the LA Galaxy equalized with a brilliant free kick as time winded down. With this win, the LA Galaxy U18s has taken over first place in the Southwest Division, however the RSL-AZ U16s remain on top of their standings with this weekend’s draw.

Next for the Real Salt Lake-AZ Academy teams is one of the biggest soccer showcases in the country, the 2012 Development Academy Winter Showcase in Sarasota, Florida on November 30th to December 4th. Six of the RSL-AZ players will also play in the Showcase Select matches that weekend: Benji Lopez, Jordan Allen and Tony Murillo in the ’95 Showcase match; Sebastian Saucedo, Justen Glad and Brooks Lennon in the ’97 Showcase Select match.

Real Salt Lake – AZ U18 vs. LA Galaxy U18
The Real Salt Lake -AZ U18s started the game against the LA Galaxy on a high note and dominated the first fifteen minutes with fast paced possession play. After a lovely combination between Jose “Coco” Navarro and Benji Lopez, Lopez had a great chance to put RSL-AZ into the lead in the 10th minute. However, his powerful shot bounced off the post and the Galaxy defenders were able to clear the danger.

The teams were evenly matched for the rest of the first half with RSL-AZ coming close to scoring the go ahead goal in the 39th minute when Lopez’s shot went just wide of the left post. After a scoreless first half, no one expected the game to turn into a real, super exciting goal-fest spiced up with some controversial calls by the referee. The Real Salt Lake – AZ team jumped out of the blocks fast for the second half and took the lead in the 48th minute through Lopez. Jordan Allen made one of his signature runs down the left flank, passed two Galaxy defenders and found Navarro lurking inside the penalty box. Navarro made a perfect soft touch lay off to Lopez who blasted the ball into the back of the net for a 1-0 RSL-AZ lead.

The RSL-AZ go ahead goal woke up the LA Galaxy players as they immediately started to press forward and after missing a close range header in the 53rd minute they found the equalizing goal 2 minutes later and tied the game in the 55th minute through Sebastian Velasquez. Only 10 minutes later, an incident occurred that changed the course of the game. Isaias Juarez and the LA Galaxy forward battled for the ball and after they both fell to the ground the referee pulled out and showed a red card to Juarez for supposedly kicking the opposing player on the ground. The referee could have stopped the play and whistled for a foul against LA Galaxy before the incident. It took LA Galaxy only two minutes to capitalize on a man advantage and scored the go ahead goal in the 67th minute.

However, the RSL-AZ team fought back and even though they were playing with only ten men, they were able to get a well deserved equalizing goal in the 73rd minute. Jordan Allen, now playing at a right back position, made a great overlapping run behind the Galaxy left defender and took the long diagonal pass down with a brilliant touch inside the penalty box and was brought down for an RSL-AZ penalty.

Lopez stepped up and scored his second goal of the game to level things up at 2-2. After 90 minutes of play, the referee added 3 extra minutes of stoppage time and right at the very end LA Galaxy scored from the corner on what was to be the last chance of the game. The final whistle blew and the RSL-AZ U18 boys’ eight game unbeaten streak had come to an end with a 2-3 loss against their fiercest rivals, the LA Galaxy.

Real Salt Lake – AZ U16 vs. LA Galaxy U16
Real Salt Lake-AZ U16s came up against a resolute LA Galaxy team determined to hand the Grande Sports Academy team their first loss of the season and narrow the point gap at the top of the Southwest Division standings.

As we have seen on numerous occasions this season already, the young RSL-AZ team started the game with a blast once again as they needed only five minutes to take the lead through Damian German whose fantastic shot from just outside the box left the Galaxy goalkeeper with no chance.

After an early lead, the RSL-AZ boys kept pressing forward and it only took them another quarter of an hour to double their lead. After a nice passing combination from several players, RSL-AZ U16s top scorer Sebastian “Bofo” Saucedo finished the play in style and notched his 7th goal of the season. In the last 15 minutes of the first half the tempo slowed down a bit and the team from Arizona took a commanding 2-0 lead into the break.

Second half was almost the exact opposite of the first 40 minutes as the Californian team came out of the blocks fired up and pulled one back after less than 3 minutes of play. The LA Galaxy’s Steve Martinez caught the RSL-AZ goalkeeper Chase Bishov standing a bit too far out of the goal and surprised him with a long range lob from 50 yards out.

After the goal, we saw a hard fought battle for every ball and with plenty of mistakes on both sides. As the final whistle approached and it seemed like the three points will stay at home, the referee missed a clear handball by the Galaxy player and then seconds later whistled for a foul against RSL-AZ and awarded LA Galaxy a free kick at the edge of their penalty box. The LA Galaxy’s Martinez turned this “gift” into a spectacular goal with a shot over the RSL-AZ player wall and into the top left hand corner, leaving Bishov helpless. In the end, it was a well deserved 2-2 tie for both teams and RSL-AZ remained untouched at the top of the Southwest Division.