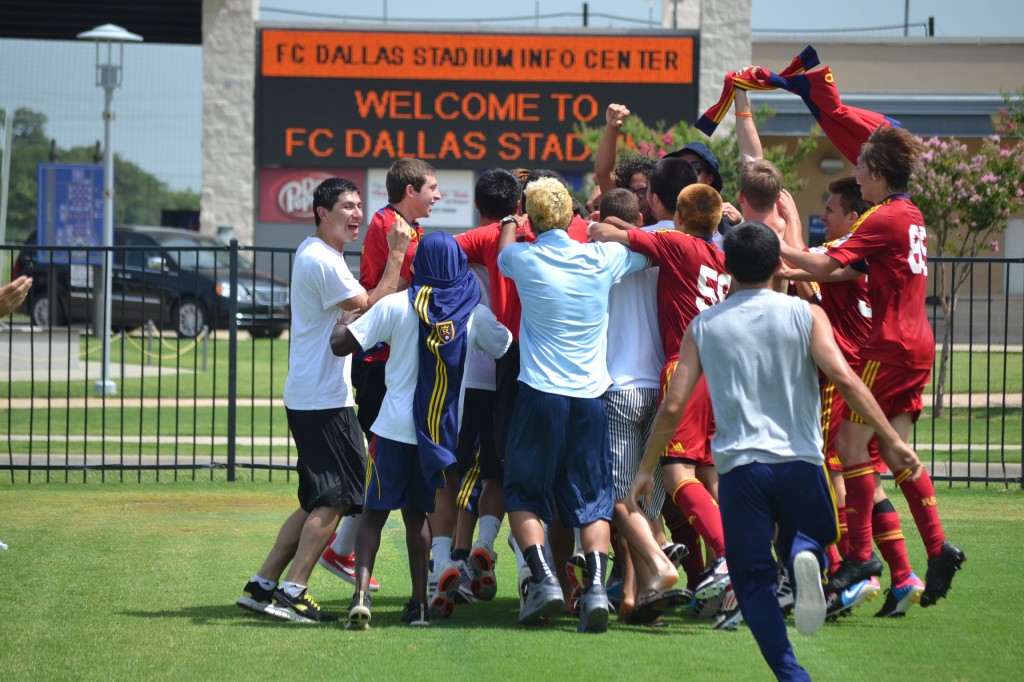 Casa Grande, Ariz. (Wednesday, July 10th, 2013) – The night before the final U-16 group game at the U.S. Soccer Development Academy playoffs, the Real Salt Lake U-16 & U-18 Academy teams gathered for a final team dinner.

The U-18s, eliminated from the playoffs the day before, would no longer be a team in 2 days time, as players would be returning home for the rest of their summer break. The U-16s, however, still had one final game left, and a win against FC Dallas would advance the team to Finals Week. The U-18s were determined to make sure that happened.

It has been said that the foundation for the RSL Academy was laid down in the 2010-11 season when the RSL U-16 team finished in third place at Finals Week. Zabasajja along with Coco Navarro and Isaias “Junior” Juarez all had a helping hand in the foundation. They were the only remaining players who were on that team that were still active players at the Academy this year as all the other players moved into the college levels.

Zabasajja remembers how that successful season, set he and his teammates up for success going forward.

“The first year was such a special year, being the inaugural season for the RSL Academy. That showed that the coaches and the staff do a great job getting talent. The first year, the talent was there and we did a good job bringing it together and making sure we came together as a team, because the guys on the team were guys I was going to play with for the next few years.”

As the dinner progressed, the U-18 players took turns talking to their younger counterparts and one message became very clear.

“They just told us to play our hardest and play our best, because you never know if you’re going to back there. It’s no guarantee,” Bayley Scholz said. “After they lost last year, the U-18 players thought they always had next year. However, it didn’t go as planned for them, so they told us to give everything we have so we can have the opportunity to go to Finals Week.”

For all the success Zabasajja, Juarez, Navarro and their other teammates experienced with the U-16 team in the 2010-11 season, the players learned how tough it is to return back to Finals Week. A single loss in the group stage at the 2011-12 playoffs eliminated the U-18 & U-16 teams, and this most recent run saw the U-18 team go winless in their three group games, first time in Academy history that a team went winless at the playoffs.

“You have to realize that everyone is going to get the opportunity to go to nationals every year,” Zabasajja said. “You take advantage of your opportunity, because you never know who’s watching. It could be your future at stake. So you need to do the best you.”

Moments before the kickoff against FC Dallas, the 18 players who were on the U-18 roster, parked themselves at the half-way line and became a mini-supporters section that felt 100+ strong.

“The speech that every single U-18 player gave us was inspirational. It was motivation for our game vs FC Dallas.,” Bofo Sacuedo said. “We went into the game knowing that they had our backs and they wanted us to do well. When we saw them cheering before the game is when we knew they were behind us all the way.”

When Saucedo scored the first goal in the 2nd minute, he ran over and celebrated with the U-18s. He scored again 5 minutes later, and ran over to U-18s again. After both goals the U-18’s sang “Believe” at the top of their lungs and the celebration and chants became contagious.

“It definitely got me pumped up off the bench to go and get a goal,” said Josh Doughty, who scored a goal in the second half.

In total, the Real Salt Lake U-16 team scored 6 goals and had 6 memorable celebrations with their older teammates.

The U-18 players will not be attending Finals Week, but that hasn’t stopped them from still being supportive. Constant praise comes in the form on tweets, text messages and calls, which make it clear to the U-16s that they and their older counterparts are “As One”.

First game for RSl-16 will be on Sunday afternoon when they take on Albertson SC.