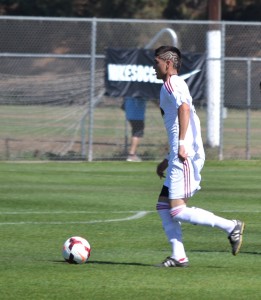 Gleadle found the back of the net on either side of the half giving him seven goals in four matches, while Carbajal extended his team-high in goals to nine scoring his fifth goal in four matches. RSL U-18 has now won all four matches played in 2014 and is undefeated in five matches.

Carbajal and Gleadle connected on the opening goal minutes into the first half when Gleadle played to Carbajal, who took a touch and fired from close range. The Nomads goalkeeper saved the shot, which then bounced back and hit Carbajal before being redirected into the back of the net.

Nomads settled down after the early deficit and equalized the match in the 19th-minute when RSL ‘keeper Luis Barraza came off his line to save a shot. The ball bounced out to an unmarked Nomads forward, who buried the shot into the right-side netting from outside the box.

Five minutes later Carbajal returned the favor to Gleadle when he played a ball over the top to empty space. Gleadle ran up, out-muscled a Nomads defender before he cut to his right and finished far post. He recorded his brace in the 53rd-minute when Te Wihongi switched RSL’s attack from the right to the left. Moises Rodriguez collected the cross, looked up and curled a ball to the back post where an unmarked Gleadle waited.

Nomads had one final threat in the 80th-minute when a ball was played into the box from the RW. Barraza punched out the threat and preserved RSL’s win.

Tempers reached a boiling point moments into the second half when a foul was called against RSL around midfield. RSL CB Erik Holt and Nomads midfielder Edward Benito got tangled up, which resulted in a straight red shown to each player. Second-half substitute Matthias Binder was sent off after being shown two yellow cards.