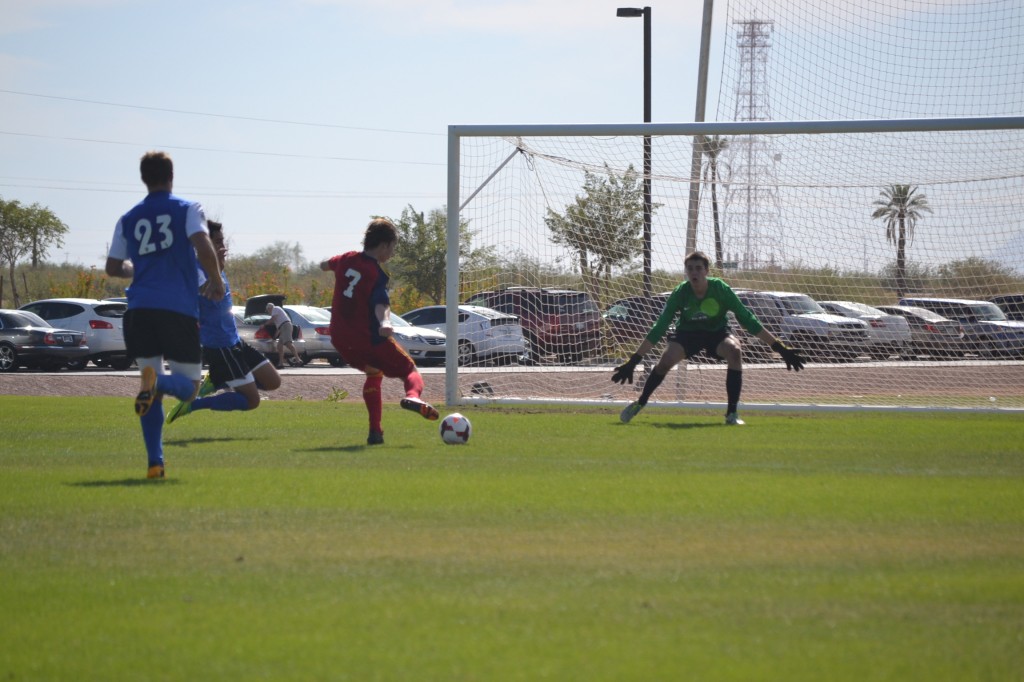 CASA GRANDE, Ariz. – The Real Salt Lake U-18 Academy team scored a pair of goals on each side of the half and extended their winning streak to four matches in a 4-1 win over Real So Cal on Sunday morning at the Grande Sports Academy.

Both sides had opportunities in the opening minutes with RSL testing the Real So Cal goalkeeper first. Niki Jackson, who has demonstrated an ability to beat the final defender in his previous two Academy matches, broke free and collected a Jose Hernandez through ball. He took a touch and rifled a shot, which was saved on the line. Sixteen minutes later, Real So Cal had their first shot on goal, but was thwarted by Luis “Wicho” Barraza, who made a diving save to his right.

Neither side could control momentum in the beginning stages of the first half, until a quick RSL counter gave them a 4-3 advantage in the 28th minute. Holding midfielder Jack Gayton made a 30-yard run and collected a Jackson pass on top of the 18. He went to his right and sent in a low drive to the back post for his second goal in as many matches.

The match opened up and Real So Cal, riding a two match winning streak, pushed for the equalizer and came close in the 30th-minute on a counter when a shot heading for the far post was saved by an aerobatic Barraza.

As Real So Cal opened up, the Claret-and-Cobalt took advantage of an over-exposed defense in the 34th-minute. Brooks Lennon just on the Real So Cal half whipped in a no look cross to Hernandez, who then mirrored the same sequence between he and Jackson earlier in the match. This time Jackson went to his left and scored his team high third goal.

Real So Cal came out in the second half with a newfound vigor and almost lit up the scoreboard in the 47th-minute if not for a clearance by Erik Holt on the line. This was the closest Real So Cal came to scoring before an 81st-minute goal when the match was well out of reach.

RSL scored their third goal in the 56th-minute when a Damian German sent in a piercing cross from the right-wing to Eric Carbajal, who stretched out and deflected the ball into the empty net for his first career Academy goal.

Corey Baird scored the fourth and final goal for RSL in the 87th-minute when Lennon played a through ball. The Real So Cal goalkeeper ran out to collect the dangerous ball on top of the 18, but a collision between Baird and the ‘keeper squirted the ball forward for Baird, who continued his run and scored to keep the Claret-and-Cobalt perfect in four matches.