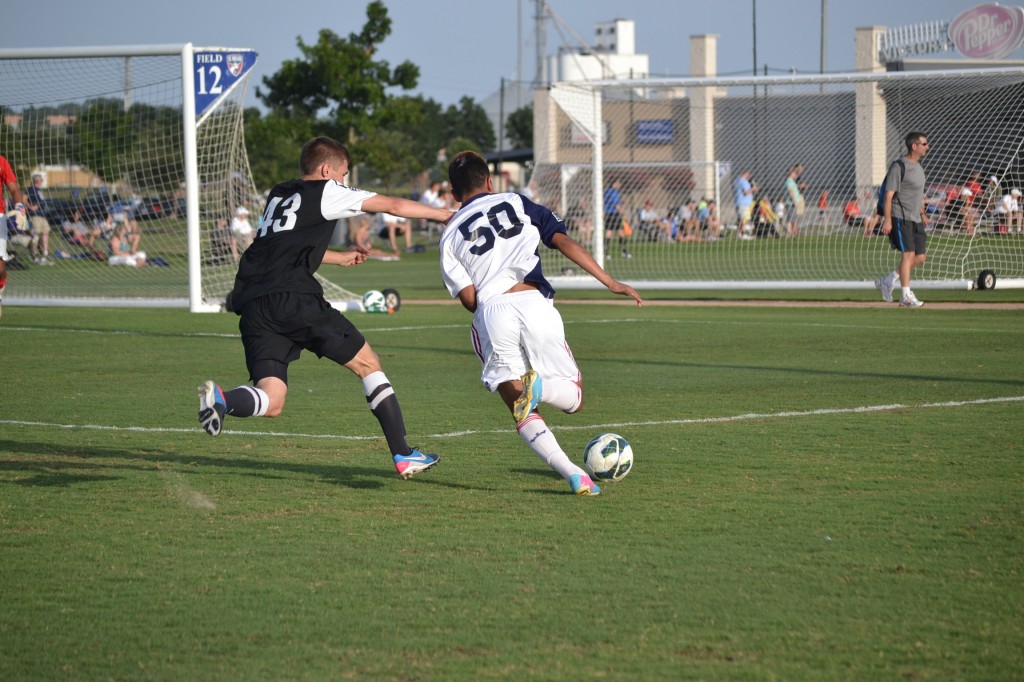 Frisco, TX (June 25, 2013) –Real Salt Lake U16 Academy scored a goal in each half and cruised to a 2-0 victory over FC DELCO in their opening game of the U.S. Soccer Development Academy Playoffs on Tuesday night.

Led by the play of Sebastian “Bofo” Saucedo and an aggressive backline, RSL is now tied for first place in their group with FC Dallas who also won their opening game.

RSL’s opening goal was thing a beauty. In the 20th minute, Diego “Diablo” Silva, playing LB, collected the ball near the midline and passed it up to Fito Ovalle while making a run on the wing. Ovalle played it back to Silva, who continued his run, and passed forward to Saucedo who passed it back to Silva. He took two touches and slotted the ball far post. FC DELCO’s defense could do nothing but stare at the new perfect precision passes RSL produced.

Saucedo doubled RSL’s lead 48th minute when he went box-t0-box, after a FC DELCO corner, and fired a screamer from the right side across the face of goal.

Unlike their older counterparts, the U-16 team wasted no time establishing their identity early in the game. Early shots by Brooks Lennon, Josh Doughty and Sacuedo threatened the DELCO goal but were all just wide of the net. Fito Ovalle, arguably his best Academy game to date, controlled the middle with poise, crisp passing and constant tackles. He alone stopped numerous DELCO attacks which resulted in the chances RSL had early on.

As the half progressed, DELCO woke up near the end and sent in a few shots that could have equalized the game. The first was in the 26th minute when a dipping ball, heading near post, was saved by a leaping ‘keeper Chase Bishov. Seven minutes later Bishov made the save of the game when an DELCO player had a open look on the left side of the net. Bishov raced out and made himself as big as possible and saved the shot with his feet.

After halftime RSL made two changes. Rodriguez playing LW switched with Silva and Jack Gayton was brought on for Doughty. This proved to be vital as DELCO brought on a few physical players. Their strategy didn’t pay off as Gayton and Rodriguez matched their opponents and essential cut off and stopped any attack DELCO had which forced them to play of the wings.

This worked into RSL’s strength at Glad and Nino cleared every cross and challenged any player who broke free in the middle. RSL continued to play lockdown defense for the remaining minutes in the second half and preserved the shutout giving them the all but important opening victory in group play.

Hungry might be the best way to describe RSL’s performance and if this game was any indication as to how they will play for the remainder of the playoffs coaches will be pleased. Constant praise was coming from the bench for individual performances. With the U-18 team already eliminated from the playoffs the U-16’s look like they are ready to keep things positive going forward for the Real Salt Lake Academy.