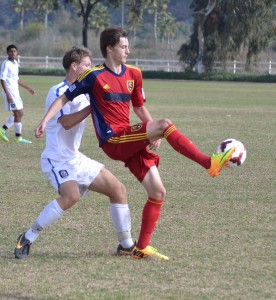 Fresh off of its impressive 2013-14 Generation Adidas Cup group stage triumph, this saw the Claret-and-Cobalt win Central Region qualifying, RSL U-16 Academy team struggled for the majority of the match, but looked like they would walk away with three points.

Sebastian Saucedo broke the scoreless deadlock three minutes before the halftime break when Danny Acosta stripped a Surf player around the halfway line. He dribbled forward and played to Sebastian Saucedo, who took a touch and finished near post. It was a sigh of relief due to the less than impressive first half showing, which saw Surf control the majority of the match with an aggressive attack that forced RSL U-16’s into some uncharacteristic decision making.

With the lead in hand, RSL U-16’s looked determined to extend the lead in the second half, but the Surf’s persistence paid off when a shot from outside the box took a nasty deflection and hit the RSL crossbar and dropped down for the equalizing goal. Fans and even the player looked stunned at what had just happened.

RSL pushed for the lead, but were thwarted time after time by a well organized Surf defense, who forced RSL to play to the wings. RSL cut in on numerous occasions from the wings, but their transition was poor and every pass or cross was either missed or played to the wrong player.

Surf didn’t threaten much after the goal and held 10-men behind the ball to hold on for the one point. It is just the third time this season the RSL U-16 team has dropped points.