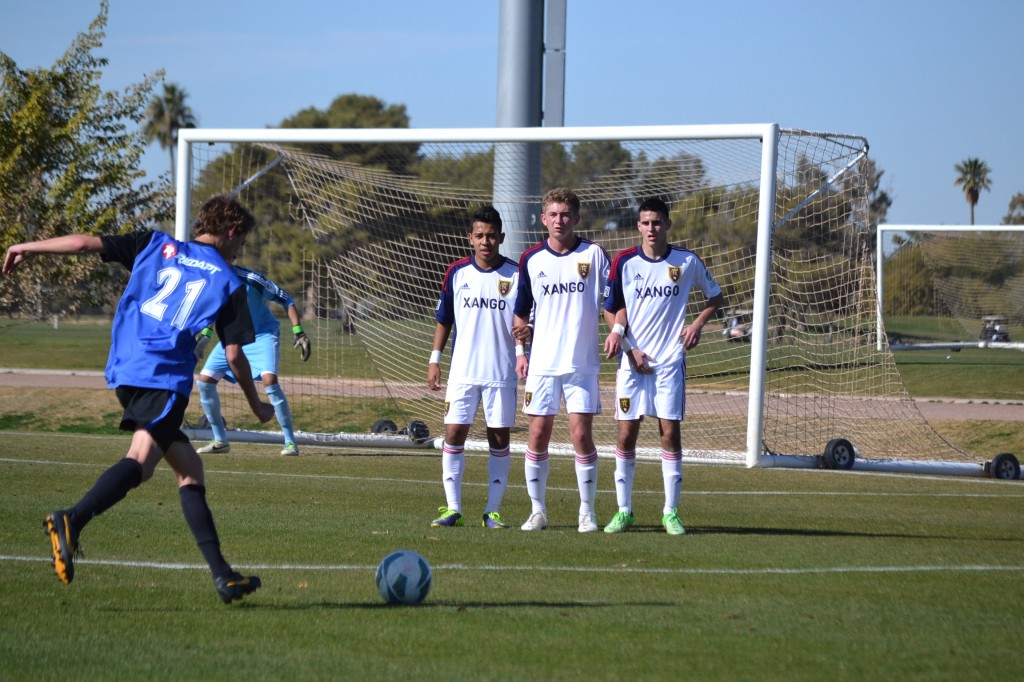 CASA GRANDE, Ariz. – The Real Salt Lake U-16 Academy team remains perfect at home by defeating Crossfire Premier 2-0 on Saturday afternoon. Through five league matches at home, the Claret-and-Cobalt has yet to concede a goal and have outscored opponents 17-0.

“They were able to get the result; they got an early goal and a good goal late, said Academy coach Mike Kraus.”Overall you can’t harp too much on a victory, but I think there are a lot of things they can improve upon and continue to get better at. But the streaks are something we will always compliment them on and it’s not easy to get shutouts and we need to commend them on their efforts.”

Saucedo wasted no time and opened up his 2014 goal scoring tally in the third minute when he made a smart turn from an Alex Knox pass on the right side. Saucedo attacked the box with urgency, separated himself from a Crossfire defender and finished the effort into the far post for his ninth league goal.

Knox and Saucedo along with Evan Waldrep and Diego “Diablo” Silva continued to push the effort and would have doubled RSL’s lead if not for a timely Crossfire defense, which eliminated the channels for RSL in the final third.

Second half substitute Kris Fourcand made the most of his appearance, when he connected with Silva just three minutes after being brought on in the 64th-minute. Silva beat a defender with pace down the left-wing, passed to Fourcand, who had his back to the net, and continued his run. Fourcand turned and played a through ball to Silva, who fired across the face of goal and into the far post for his fourth goal on the season.

Defensively, RSL’s backline: Justen Glad, Miles Stray, Gavino Carranza and Aaron Herrera made things easy for goalkeeper Christian Herrera, as he was called upon once and made a brilliant double-save to preserve the shutout.

“I credit everything to my centerbacks, my whole defensive block,” said Christian Herrera. “They work hard every week in practice and its thanks for them we can get these shutouts.”

The RSL-AZ U-16 team will put their perfect start at home to the test this weekend against Strikers FC on Saturday at 1:30pm.