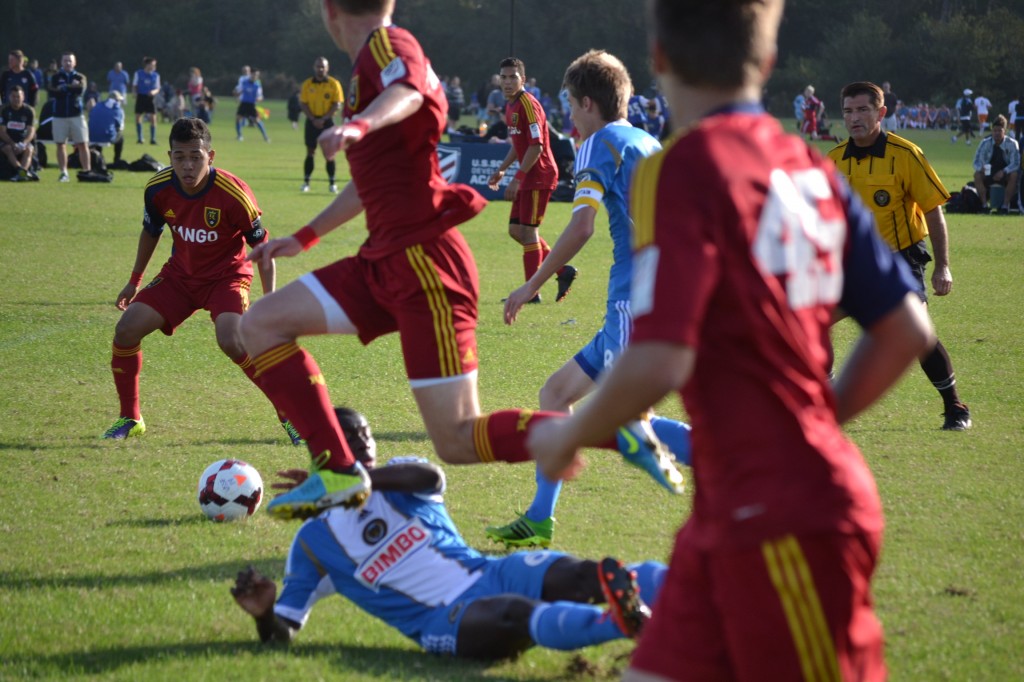 SARASOTA, Fla. – The Real Salt Lake U-16 Academy team wrapped up the 2013 calendar year with a one goal shutout victory over MLS Academy side Philadelphia Union in the third and final match at the 2013 Winter Showcase on Sunday morning.

Photo Gallery: Real Salt Lake U-16 vs. Philadelphia Union U-16

Two seconds into the second half, Sebastian Saucedo scored the lone goal when he chipped the Union goalkeeper, who was standing on the top of his box from the midway line and RSL goalkeeper Christian Herrera held the Union scoreless for his sixth consecutive shutout. The Claret-and-Cobalt went undefeated at the Winter Showcase, outscoring opponents 7-1, winning two matches and drawing one.

Playing against a second MLS Academy team in as many days, the Real Salt Lake U-16 team settled into the match immediately and dictated the flow of the match with ease. Team defense and quick recoveries limited the Union to a handful of touches in the RSL half, which allowed the Claret-and-Cobalt to pick apart the Union defense. However, when RSL found themselves in the Union final third, they were thwarted by an organized defense, who held its shape and forced RSL to play on the wings and fire shots from well outside on the 18.

RSL did take a few shots inside the box and efforts by Kris Fourcand and Tate Schmitt were all blocked.

At the start of the second half, Fourcand tapped the ball to Saucedo, who looked up and saw the Union goalkeeper out of position. He pushed the ball forward and placed a perfectly lofted ball over the ‘keeper, who had no chance to make a save.

With momentum on their side, RSL pushed to double the lead and would have had it if not for some timely defense by the Union. However, RSL received a massive break when Gavino Carranza was taken down inside the box in the 73rd-minute. Saucedo then missed the penalty, which shifted the momentum to the Union.

Two minutes later, Herrera was tested for the first time when a turnover deep inside the RSL half saw the Union attack the net like a swarm of bees. A point blank shot was deflected out by Herrera and he punched out the ensuing corner. The Union had a few more looks after this, but failed to capitalize. RSL U-16 held on for the lead and recorded its 7th shutout this season.