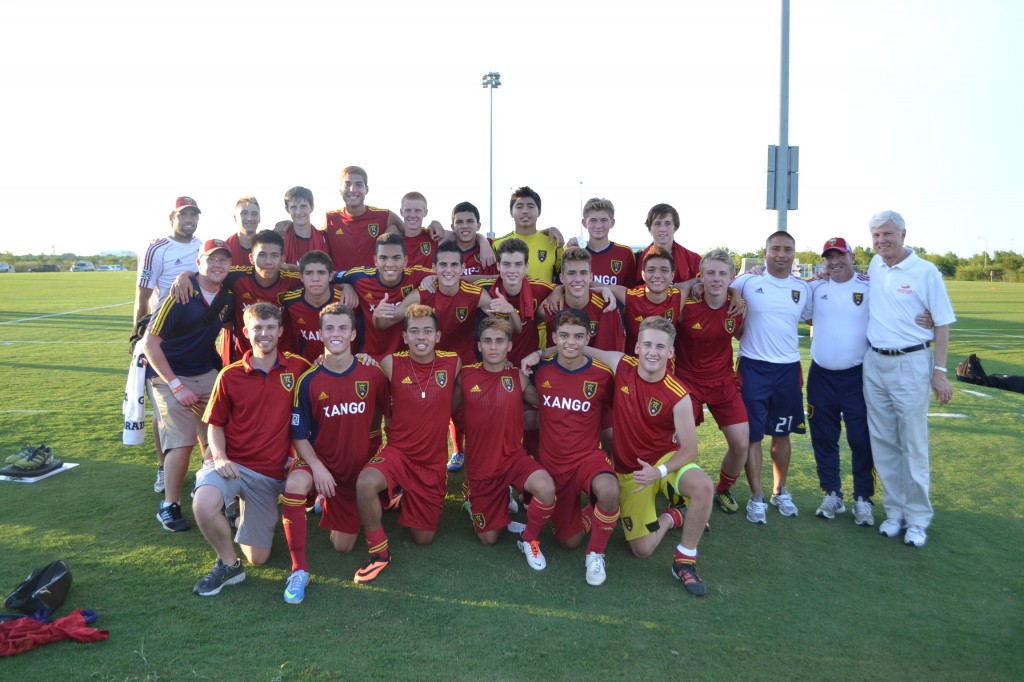 Picture gallery from the game

The U.S Soccer Development Academy title will be held on Saturday night at BBVA Compass Stadium, home of the Houston Dynamo, with kick-off scheduled for 6:00 p.m. CT. The game will be broadcasted live on ussoccer.com. RSL will face Dallas based Academy team Solar Chelsea, the 4th club from Texas the RSL Academy will face in the playoffs: FC Dallas, Houston Dynamo and Texas SC Houston.

The road to the National Championship game wasn’t the walk in the park coaches and players were hoping for. RSL started off on a positive note when they defeated Albertson SC 3-1 in the opening game. Things became a little more complicated when RSL dropped the second game to Houston Dynamo by a score of 1-0. Heading into the final group game, RSL had to defeat Texans SC and needed the Houston Dynamo to draw or lose to Albertson SC. The latter happened when Albertson defeated the Dynamo 2-0.

RSL started off the game very aggressive on the wing, due in part to the Texans congesting the middle of the field. Brooks Lennon and Bofo Saucedo had early shots when they cut in from the wings, but failed to put enough pace on the ball to really challenge the Texans goalkeeper. Texans did create a few chances of their own during the half, but nothing that truly threatened RSL goalkeeper Luis “Wicho” Barraza, as he punched two crosses out.

Jason Eng had RSL’s last chance on goal in the first half when he sent a screamer for the far post from the wing that sailed just high.

At the beginning of the second half, Texans SC threw as many players forward as they could and almost went up a goal in the 42nd minute when RSL’s defense has a small breakdown. Fortunes for RSL changed near the 50th minute when coaches went to the bench. On came Josh Doughty and Diego “Diablo” Silva.

Silva’s blistering pace on the wing, coming from LB, created a whole new dynamic to the RSL attack. His constant runs put enormous pressure on the Texans defense, which started to open up space in the middle for RSL players to make runs into the box.

Combined with Silva’s pace, RSL’s movement in the middle on the pitch was spectacular. Evan Waldrep, Jack Gayton, Fito Ovalle, Jose Hernandez and Saucedo created numerous problems for the Texans who were a tough team to beat once in the final third.

Four low crosses from RSL went across the face of the goal, but mistimed runs by RSL saw the players just inches from connecting the opportunity. Finally in the 60th minute, Josh Doughty connected on a cross, sent a header far post to an unmarked Damian German, who made sure to finish the golden opportunity. With the lead in hand Texans, looking to play the spoiler role, pushed players forward. Stellar defensive performances by Justen Glad and Dillon Nino deterred many opportunities for the Texans.

Barraza made the save of the playoffs in the 64th minute when a header from a Texans player went far post. Barraza stretched out and made a finger-tip save preserving the shutout. In the 80th minute, Texans earned their last chance on a free-kick, but wasted the opportunity when the ball went well over the crossbar. The game was called moments later giving RSL the 1-0 victory.